2022 IS THE YEAR OF GRAMMYS; I’M BRINGING IT TO THE MOTHERLAND ” – Wendy Shay

Ghanian songstress, Wendy Shay has announced that the year 2022 is the year of her Grammys!

The Rufftown Records signee took to her Twitter and urged her fans to be on the lookout for her as she is going to make history in the entertainment industry.

She wrote; 2022 is the year of Grammys I’m bringing it to the motherland Watch me!

Historically, Rocky Dawuni got his second Grammy nomination at the 64th Grammy Awards, which will be held this year in 2022.

Others, including Stonebwoy and Fuse ODG, have made appearances at the Recording Academy after albums on which they appeared received nominations.

So, Wendy Addo is a firm believer that the time is now for her to get her name in the records of the The Recording Academy! 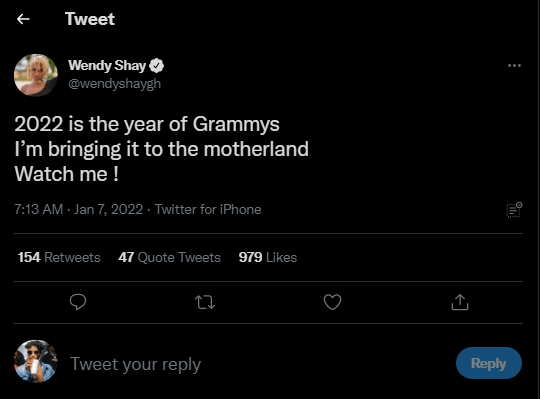