The Chairman of the New Patriotic Party (NPP), in the Bono Region, Kwame Baffoe, widely known as Abronye DC has filed a court action over the emoluments that is reported to have received its approval by Parliament for wives of the President and Vice President to be paid salaries and allowances.

Cited by Citi News, Abronye DC filed an application at the Supreme Court on Thursday, July 8 2021 praying the apex court to rule that the presidential spouse emoluments is null and void.

He argued that the First and the Second Ladies do not fall under Article 71 officer holders, hence the committee set up to determine salaries and gratuities for Article 71 officeholders erred in its recommendation.

“A declaration that the approval by Parliament to pay salaries to the First and Second Ladies is inconsistent with Article 71 clauses 1 and 2 of the 1992 constitution of the Republic of Ghana and consequently be declared null, void, and unenforceable.”

“A declaration that, per article 71 (1) and (2), the position of the First and Second Ladies of Ghana do not fall under the category of public officeholders.”

Mr. Abronye also contended that the Emoluments Committee exceeded its mandate by making recommendations for emoluments for presidential spouses and that the committee was only limited to determining “salaries and other benefits and privileges of only public officeholders.”

By this action, Abronye DC is invoking the original jurisdiction of the Supreme Court to interpret Article 71 of the 1992 Constitution. 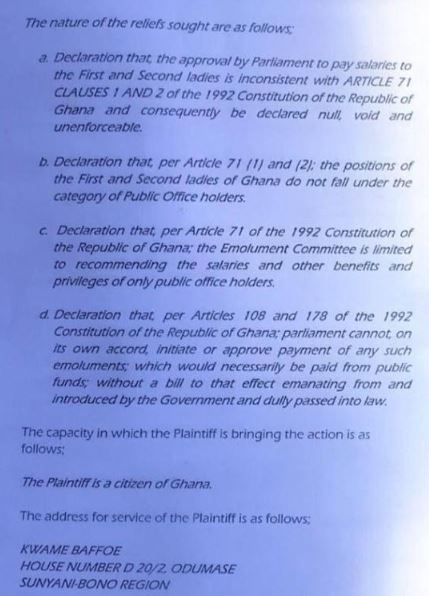 According to a report by Ghbase.com, while the payment of allowances to the First and Second Ladies is not new, Information Minister, Kojo Oppong Nkrumah has clarified the new move by saying:

“The truth of the matter is that all surviving spouses of Heads of State, current and former, have always received salaries. Lordina Mahama, Naadu Mills, Matilda Amissah-Arthur, Nana Konadu Agyeman Rawlings, Faustina Acheampong, Fulera Liman etc have all been receiving salaries since President Kufuor’s time.”

“What has happened now is that the arrangement has been made formal, but that was done legally based on the recommendation by the Emoluments Committee [in 2019],”

Should First Lady Rebecca Akufo-Addo and Second Lady Samira Bawumia be paid their backdated salary from 2017 to June 2021, this is a projection of what they are supposed to take home: