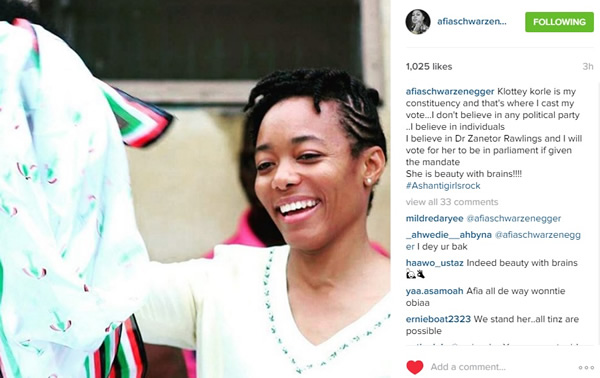 The “Kokooko” hostess took to Instagram this morning to show her support for the promising politician. She posted Zanetor’s photo with this caption.

“Klottey korle is my constituency and that’s where I cast my vote…I don’t believe in any political party…I believe in individuals I believe in Dr Zanetor Rawlings and I will vote for her to be in parliament if given the mandate She is beauty with brains!!!!#Ashantigirlsrock”.

Meanwhile, news coming in about the ongoing National Democratic Congress (NDC) primaries indicates that, Dr. Zanetor Rawlings’ name is missing in the voters’ register in the Korle Klottey constituency.

All attempts to trace her name to vote in the ongoing presidential and parliamentary primaries have proved futile.

Zenator has reportedly been to three different polling stations but is yet to find her name on any of the voters’ register. She is contesting incumbent Nii Armah Ashitey and grandson of national hero Tetteh Quarshie, Leeford Kpakpo Quarshie.