I HAD A BEAUTIFUL DREAM ABOUT MOESHA, LET’S PRAY FOR HER – Akuapem Poloo Begs Fans

Ghanaian actress and brand influencer, Rosemond Brown popularly called Akuapem Poloo has taken to social media and lamented over how she misses her colleague and friend, Moesha Boduong following her break from social media and her seclusion.

As you may already know, Moesha Boduong who after announcing her new faith in Christ Jesus and declaring herself as a born-again Christian has been indoors for some days now being looked after by her family and also placed under spiritual guidance by her church pastor, Rev. Gabriel.

Ghanaians are currently worried about her present condition after she was rescued by some residents of an area whilst trying to commit suicide by jumping from a storey building at an undisclosed location.

This morning, her friend, Akuapem Poloo made a post on her Instagram page and she revealed that she had a beautiful dream about Moesha but she did not reveal the content or details about the dream.

The mother of one who served two weeks in Nsawam prison after she was found guilty of indecent exposure,  however, went ahead to ask for prayers for her and expressed how much she had missed her. 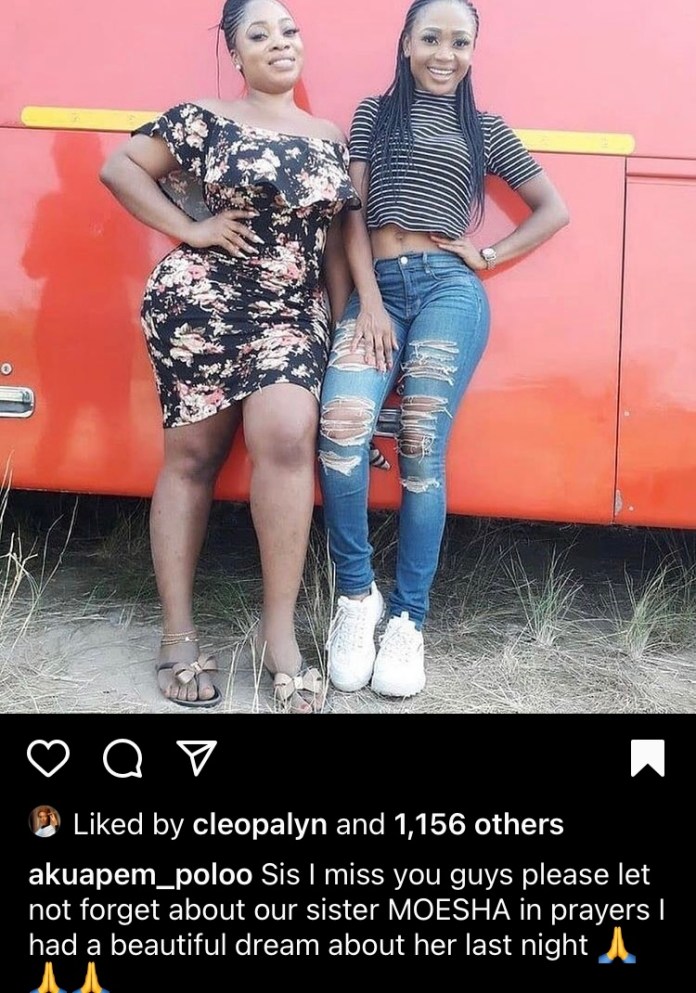 Previous SUGAR TONE IS BROKE AND ALCOHOL IS HIS ONLY SOURCE OF HAPPINESS’ – Father Laments
Next MY NEW PARTNER CHOPS ME WELL, HE DESERVES A TITLE IN THE GUINNESS BOOK OF RECORDS – Abena Korkor