I NEARLY TOOK MY LIFE- KSM Shares Near Death Experience

Legendary Comedian Kweku Sintim Misa popularly known as KSM shared to his viewers and fans in an interview that he nearly took his life.

During an interview with Okyeame Quophi at Angel fm, he shared a near-death experience, he said he had to do it because he just couldn’t take the crisis that kept coming, from one crisis to another so he felt life was not worth living.

He also said what stopped him from killing himself, was his family and how they were going to feel on hearing the news and also he thought about the aftermath of his action, that was made him stop.

KSM is the best satirist in Ghana and has been awarded severally for his outstanding work.

Previous EVERY MAN HAS A D!.CK, FIND THE ONE WITH A BRAIN – Bridget Otoo To Ladies
Next I DONT NEED TO WIN VGMAs BEST RAPPER TO KNOW AM THE BEST-Opanka Brags 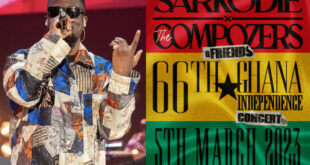 Sarkodie via his social media platforms announced on Wednesday, February 1, 2023, that he was gearing …