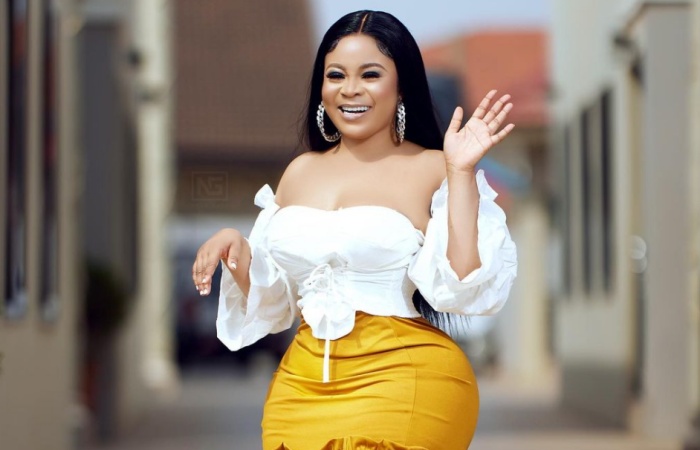 Ghanaian actress, Kisa Gbekle, has shared her experience with s3xual assault as she reveals she was once r@ped when she was very young.

Speaking to ace broadcaster, Abeiku Santana on his ‘Atuu Show’, Kisa Gbekle claimed a man raped her at age 15 and thus making her lose her virginity. However, the experience though horrible was worthwhile because she enjoyed it.

Kisa said she was filled with youthful exuberance as a young girl who grew up in Aflao in the Volta region (Border town).

Kisa said she wanted to explore everything including s3kz and this somewhat landed her into getting abused.

Describing how she felt during that particular ordeal, the popular actress said she enjoyed the s3x although it was in a form of rape.

She added that her parents were upset and for that matter reported the incident to the police but the issue was later settled at home.

“It was those mama ne dada kinda thing. People my parents trusted me with, did this to me. At that time, I was also a bad girl. It was like rape but I liked it. The guy was 17 or 18 years around that time. Although it resulted in a police issue, to me it was a child’s play. Later we squashed the issue at home.”

Kisa Gbekle also recounted some harsh punishments she received from her mother as a result of her ‘bad girl’ behaviour.

“I was a bad girl to an extent my mum always inserted pepper in my vagina as a punishment.”