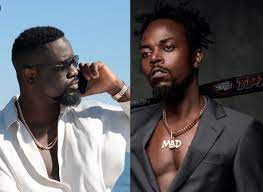 We were aware of how close rapper, Sarkodie and his colleague, Kwaw Kese were from the era of the “final two” songs. That connection and friendship, though, appear to have weakened over time.

This is due to Kwaw Kese calling Sarkodie an ungrateful person last year (2021) somewhere.

The crazed man explained his motivation for making these claims by saying that Sarkodie relied heavily on him while he was in need.

In the video he released, Kwaw Kese could be heard bemoaning Sarkodie’s decision to desert him despite what he had previously done for him.

However, Kwaw Kese and Sarkodie have collaborated on a new song titled “Win” after receiving a number of reprimands and insults.

Because of this, highly outspoken showbiz critic Ruthy believes that Kwaw Kese should publicly apologize to rapper Sarkodie for damaging his reputation in order for the song to succeed as planned.