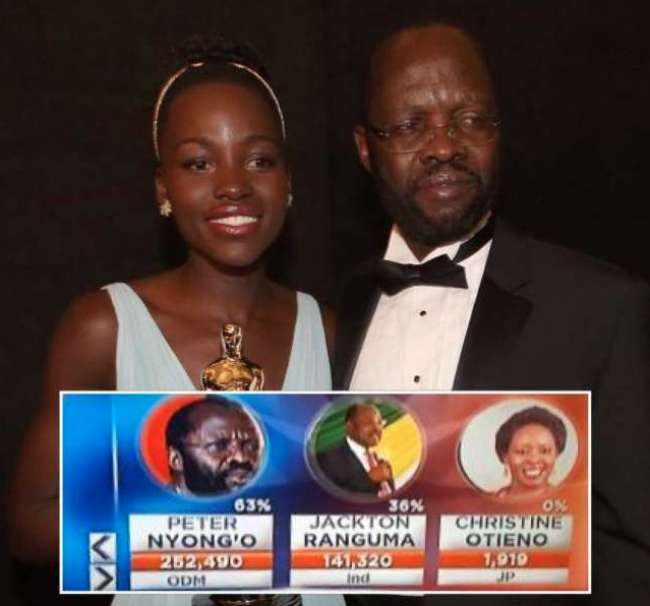 According to reports, Lupita’s dad who is the Orange Democratic Movement’s candidate accumulated 261, 972 votes, representing 63% of the total votes cast in the country’s General elections held on 8 August 2017.

Prof. Anyanga Nyong’o defeated his rivals, Jackton Ramguma and Christine Otieno to win. At 83% of the polling stations reporting he got 252, 490 which is 63% while Jackton Ramguma got 141, 320 which represents 36% and Christine Otieno got 1919 representing less than 1% of total votes cast. He ran under the National Super Alliance coalition. Kisumu is NASA stronghold where the party easily defeated the president’ s Jubilee party.

His world famous daughter had campaigned for her father months before the election took place.

The “12 Years a Slave” actress in a 2.49 minute-long video shared via her Facebook page, beckoned on electorates of the state to vote for her father through an impassioned appeal. The video has been viewed over 300,000 times and shared more than 800 times on Facebook.

Although the actress had earlier said she wouldn’t be able to make it down for the election due to a new movie she is working on, she told her father, “I support your bid to be governor of Kisumu county…you can count on my prayers and my support from afar”.

Lupita must be a happy person now that her Politian father has emerged victorious but she has made any official comment yet about her father victory.