Controversial Ghanaian radio presenter and Reggae musician, Blakk Rasta has thrown shades at his colleague Shatta Wale over his fake gun attack that held the nation at ransom on Monday, October 18.

Shatta Wale is currently facing the law for staging a stunt purported to make Ghanaians believe the prophecy made by a preacher, Jesus Ahuofe that he will be shot by some people had trully happened and Blakk Rasta has described Shatta Wale as junkie adding that no amount of death hoaxes can resurrect him.

On top of it all, Blakk Rasta spoke trash about Shatta’s upcoming album called GOG and labeled it borla.

Blakk Rasta’s consistent calling of Shatta Wale a junkie brought concerns to people on social media. They were questioning if Shatta Wale was on drugs or not.

They were of the view that his face looked like he was indeed sick. The caption spoke on how Shatta Wale was looking different.

Others said he looked like someone’s who is on drugs and someone who is sick. They asked that his health conditions be checked and taken seriously. 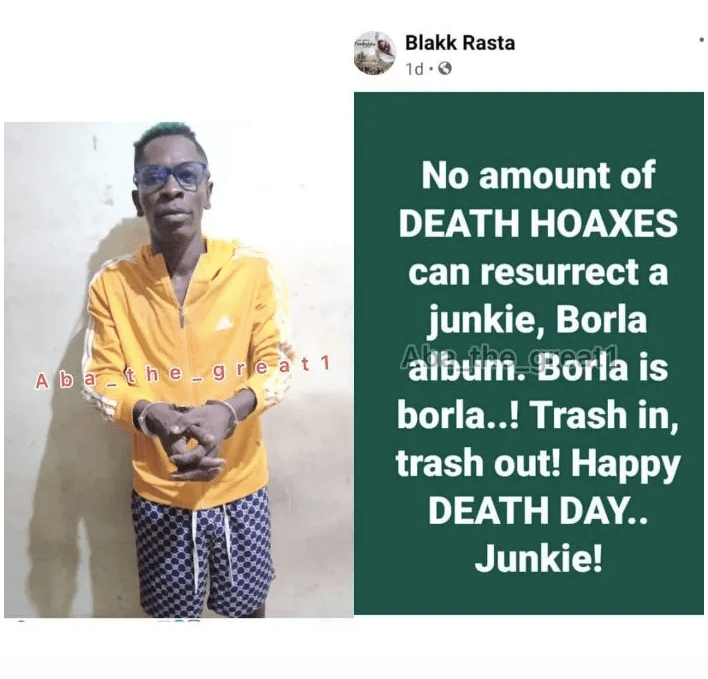 Previous CITI FM’S JESSICA OPARE SAFORO, THE VOICE BEHIND THE “YOU HAVE JUST ONE MINUTE REMAINING” ON MTN (VIDEO)
Next HELP ME APOLOGISE TO LILWIN – Funny Face Pleads In Court