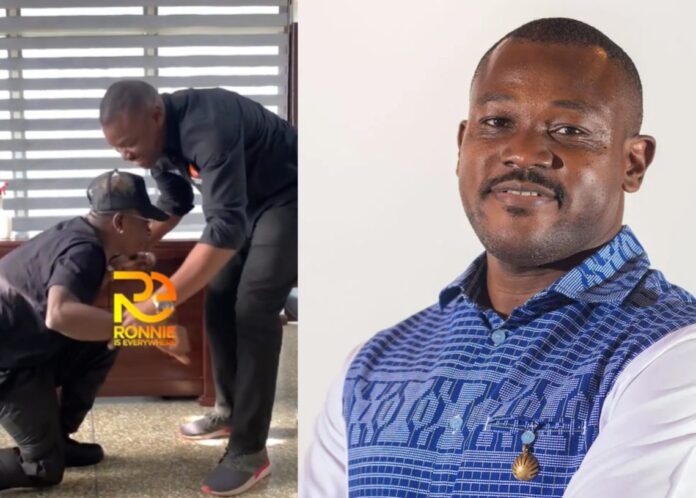 Shatta Wale was captured earnestly apologizing for the Hogbetsotso debacle to Joseph Addo-Yobo, executive director of the Total Family Health Organization and owner of the Ebony Condoms brand, in a video posted by blogger Ronnie is Everywhere.

Africa’s most celebrated performer recently used social media to explain why he wasn’t present at the Hogbetsotso Beach Rave, which was broadcast live in Tegbi in Ghana’s Volta Region.

Shatta Wale, the event’s headliner, was said to have arrived in town and even been traveling with his entourage in hired automobiles given by the organizers, but he failed to show up on stage.

The turn of events undoubtedly left fans and organizers inconsolable, which is why the Dancehall has shared his side of the tale on social media.

Shatta has spoken out on social media after remaining silent for days to explain his absence from the stage.

When he already had an understanding with organizers that he would not take part in such an arrangement or even greet any chief, Wale claimed he was transported directly to a radio station to grant an interview.

He said that when one of the organizers threatened to stop paying for his lodging if he declined the interview, that’s when he left.

“It is interesting to note that Shatta Wale had shown up at the venue of the concert in vehicles rented for him and his team by the organizers yet could not be found afterwards.

All efforts by the two management teams to get him to come to the concert grounds to perform to the waiting crowd proved futile,” parts of the statement from the organizers read.

In a recent development, Wale’s godfather Bola Ray accompanied him to the show’s organizer so that he could express his regret for the regrettable circumstances.

Unexpectedly, the SM boss apologized to Joseph Addo-Yobo by bending down on his knees, but a “large guy” like him shouldn’t be doing so, so he was promptly requested to stand up.

Previous DON’T BE FOOLED BY MY FLAMBOYANCE ON SOCIAL MEDIA, THEY ARE FREEBIES – Nana Aba Anamoah To Young Girls
Next AFIA SCHWARZENEGGER SENTENCED TO PRISON WITH HARD LABOR FOR DEFAMATION