YOU ARE NOT CHASING MY BOYFRIEND, PLEASE FORGIVE ME’ – Adu Safowaa Begs Nana Aba Anamoah

Actress and event organizer, Adu Sarfowaa who launched an attack on ace television presenter and philanthropist Nana Aba Anamoah has in a recent post sent some words of apology to her.

Adu Safowaa who is the CEO of Africa Top Entrepreneur Awards begged Nana Aba Anamoah to find a place in her heart to forgive her as she confessed that she has no business with Nana Aba in any way.

In a recent post by her on her Instagram page, Adu Safowaa debunked her earlier claim that Nana Aba Anamoah is chasing her boyfriend as she explained that what she said earlier in the viral video was completely taken out of context

This comes after she was granted bail following her arrest and detention at the Atomic Hills Police station in Ashongman where she was interrogated. According to our sources, when Police quizzed Adu Safowaa as to why she shared the said video, she responded by saying that she needed hype for her upcoming events.

We earlier reported that Adu Safowaa had tendered an unqualified apology to Nana Aba Anamoah through her management after falsely accusing her of trying to snatch her boyfriend from her. 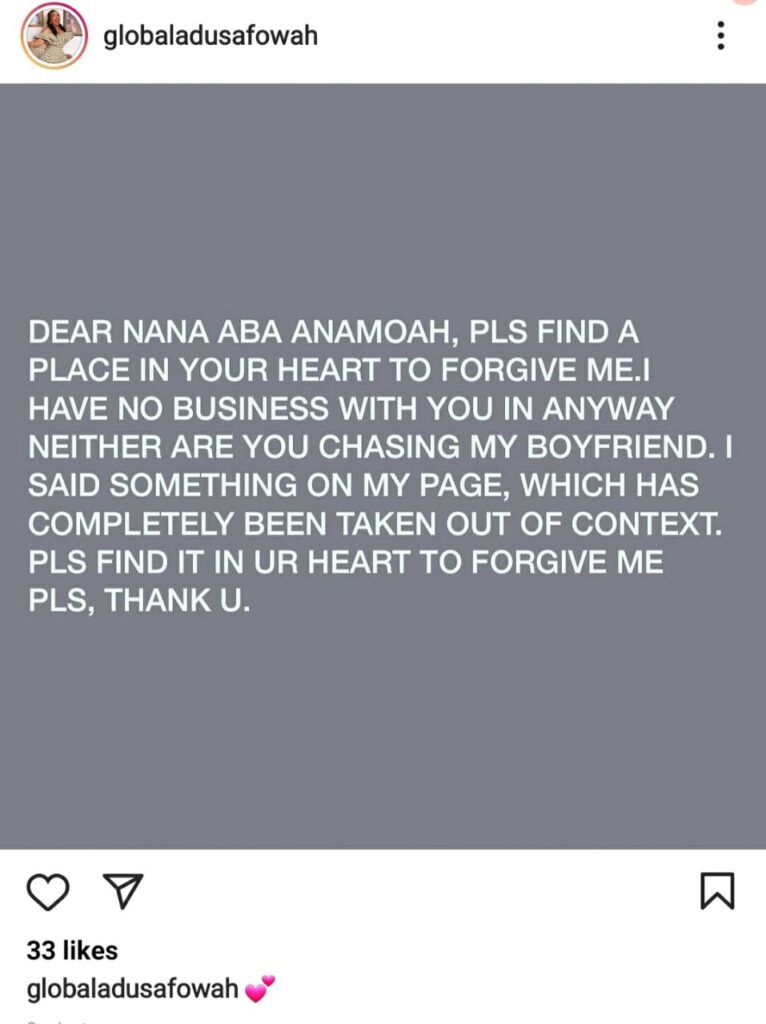 Previous YAW TOG FINALLY COMPLETES SHS; FIRST VIDEO OF HIM CELEBRATING POPS UP ONLINE – Watch
Next GO AND ASK MY MOTHER IN THE VILLAGE HOW I GOT MY HIPS – Florence Obinim Replies Presenter Who Asked How She Got Her Hips Overnight