FOOLISH MAN, TB JOSHUA DID NOT DIE BECAUSE HE CRITICIZED THE NATIONAL CATHEDRAL– A Plus Blasts Eagle Prophet

Controversial Ghanaian political and social activist, Kwame A Plus has attacked the General Overseer of God’s Crown Chapel, Rev. Reindolph Oduro Gyebi over his warning to Ghana on the national cathedral.

Rev. Reindolph Oduro Gyebi popularly called Eagle Prophet said that those will speak against the establishment of the national cathedral will die.

Reacting to his statement, Kwame A Plus referred to him as foolish man and asked him if he will live forever after his death and pointed to the fact that late Prophet TB Joshua died without talking against the national cathedral.

According to him, no one will live on earth forever stating that it’s untenable for him to death threats to seek one’s silence who’s against the building of the National Cathedral.

“Foolish man!!! If die you live forever? Did TB Joshua die because he criticised the nationalCathedral? Everybody will do! Stop fooling!!!” 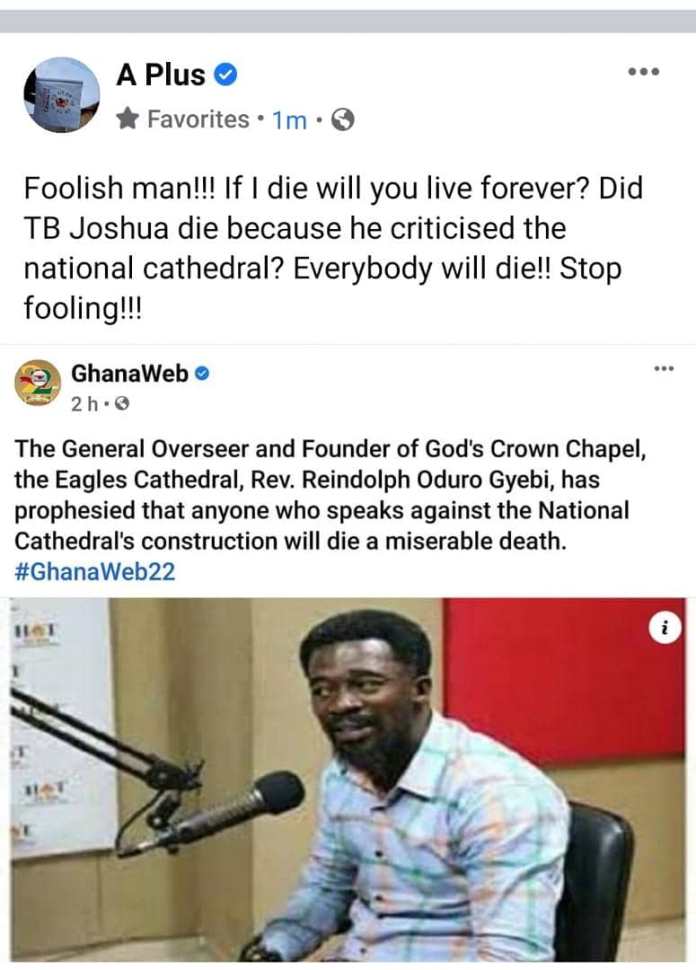 Previous ‘EVEN MY OWN MOTHER COMPLAINS I DON’T ANSWER HER CALLS’ – Sarkodie Replies To Colleagues
Next I’M HAPPY YOU HAVE STARTED,WE WILL DRAG OURSELVES INTO THE MUD’ – Xandy Kamel Throws Shades