I HAVEN’T HAD S£X IN 2 YEARS – Blogger, Ameyaw Debrah Claims

Popular Ghanaian blogger, globe trotter and entertainment journalist, Ameyaw Debrah has caused a stir on social media after opening up on his se.xual life.

Ameyaw Debrah who got married to his beautiful lover in a colorful wedding ceremony a few years ago revealed that he has not had se.xual intercourse in the last two years.

His revelation which was made on his official Twitter page has raised eyebrows on the micro-blogging platform especially because they don’t know the reason for his condition considering the fact that he is a married man.

Although little is known about his wife, it is strange what will put the illustrious entrepreneur in such a condition and what Ghanaians are concerned about is if all is well in his marriage as whilst this looks like a mere statement, many perceive it as an outcry.

Well, a cross section of Ghanaians have alluded to the fact that he may be lying and trying to chase clout. 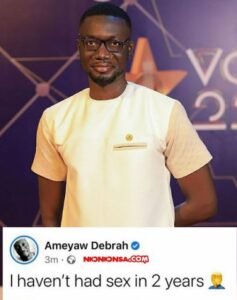 Previous “DO NOT RUSH INTO MARRIAGE, FIND HAPPINESS IN YOUR SINGLE LIFE”- Actress Khareema Aguiar
Next I WANT MY SON DEAD OR ALIVE’ – Castro’s Father Cries Out As Law Declares Him Dead