UK-based Ghanaian singer, Fuse ODG has thrown his weight behind songstress, Feli Nuna, following her clash with businessman and industry stakeholder, A Plus.

On Saturday, Feli Nuna lamented bitterly on UTV over how female musicians in Ghana are not getting funding for their business and music careers because most of the potential investors demand s3x before agreeing to invest in their talent.

A Plus and other panelists including artist manager, Bulldog alluded that a man giving conditions such as wanting to have a s3xual affair before agreeing to finance a woman’s music project is personal because it is his money and he decides what to do with it so far as he is not forcing to sleep with the female musician.

This did not go down well with Feli Nuna who remarked that A Plus is not making sense and it led to a clash of insults between them.

Reacting to this, Fuse ODG in a tweet asserted that the panel interview with Feli Nuna on the ‘United showbiz’ show displays how dangerous the creative industry space is for women in Ghana.

She wondered why a man should have the right to want to have s3x with the woman if the woman needs their investment and he said he is proud of Feli Nuna for standing up for women. 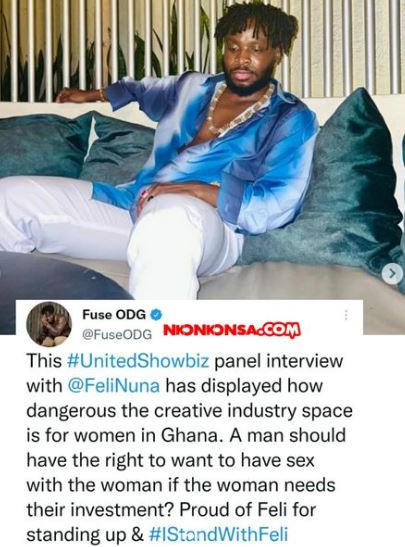 Previous OUR CELEBRITY FASHION ON THE RED CARPERT IS POOR – Tailor, Elikem Kumordzi
Next LEAKED DOCUMENT REVEALS HOW LATE SIR JOHN WILLED AND SHARED PORTIONS OF ACHIMOTA FOREST TO HIS FAMILY