The Chairman of GN Bank, Dr. Papa Kwesi Nduom, and board of directors of GN Bank have been freed of all money laundering charges after District Judge, Thomas M. Durkin in a US Federal court in Chicago, Illinois threw out a complaint against them.

The equity fund and securities investment company based in the United States, Birim Group LLC, filed the legal challenge against Dr. Nduom and 18 others, including his immediate family, over claims of money laundering and wire fraud.

The complaint was filed by the California Limited Liability Company, whose sole member was the lawyer who filed the complaint.

The lawyer had purchased $30,000 and $52,219 claims against companies in Ghana from two citizens of that country.

In response to the Tuesday, November 23, 2021, ruling, an elated Dr. Nduom in a Facebook post expressed his heartfelt gratitude to God for the victory.

“For I know the plans I have for you, says the Lord, plans to prosper you and not to harm you, plans to give you hope and a future.” Jeremiah 29: 11.
I am extremely happy to report that the Birim Group Lawsuit filed against me and others in the USA alleging money laundering etc., has been DISMISSED!!!
Thank you, Lord! 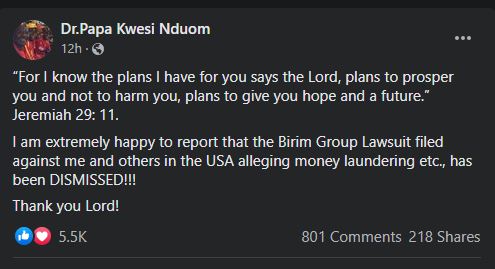