The leadership of the Revelation Church has issued a press release addressing the ongoing controversy surrounding the predicament of converted Ghanaian actress and slay queen, Moesha Boduong.

In the press release dated July 14, the leadership of the church headed by Pastor Gabriel said that it has noted the various comments and remarks on social media in relation to Moesha Boduong now Maurecia Boduong and ordinarily he church would not have responded as their focus is on her recovery and wholeness.

You would recall that earlier, music executive, Ayisha Modi vented her spleen on Pastor Gabby as she called him out on social media and accused him of being responsible for what Moesha Boduong is currently going through.

According to Ayisha Modi, Pastor Gabriel instructed Moesha to sell her cars and collected the money she earned from the sales and also claimed Pastor Gabriel gave Moesha an oil to drink.

The Revelation has on the back of the allegations levelled against their pastor decided to set the record straight via the press release stating categorically that Maurecia or any member of her family did not give any properties or cars or sale proceeds to the lead Pastor or the church adding that their claim is verifiable and what Ghanaians to disregard any other claim because it is a lie from the pit of hell.

They also stated that they have not given Maurecia anything to drink or eat as it is being purported and may take a legal action against the persons involved for defamation.

Read the statement below; 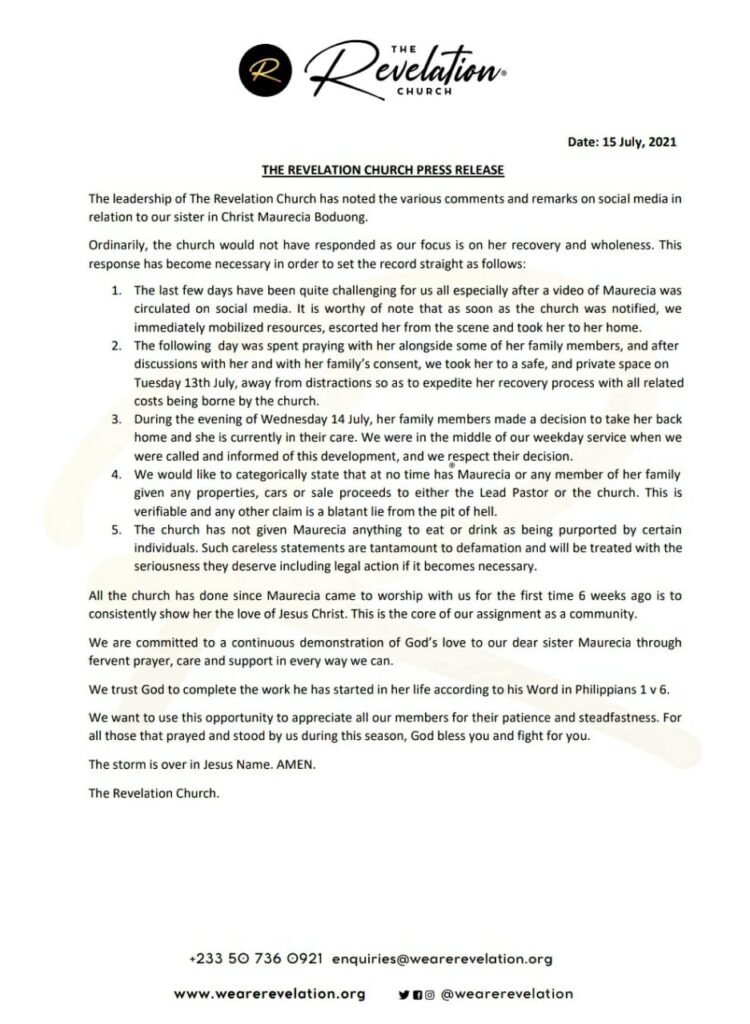 Previous WATCH THE SH0CKING MOMENT AMERICAN RAPPER, INDIAN RED BOY WAS SHOT TO DEATH DURING AN INSTAGRAM LIVE
Next D-BLACK IS NOT MY TYPE I HAVE NOTHING TO DO WITH HIM – Sefa Debunks Dating Rumours