JAY Z PROMOTES SHATTA WALE FOR HIS COLLABORATION WITH BEYONCE

Shawn Corey Carter, known widely as Jay Z, gave his wife Beyonce and Shatta Wale a massive boost as he took to his Twitter account to share the Already video.
It is yet to be known what necessitated the move but his singular act would go a long way to give Shatta Wale a lot of mileage as Jay Z is noted to carry a lot of star power.
The American star who is currently worth $1 billion dollars, after posting the Already video, captioned it with the”#BlackIsKing”#BlackIsKing”. 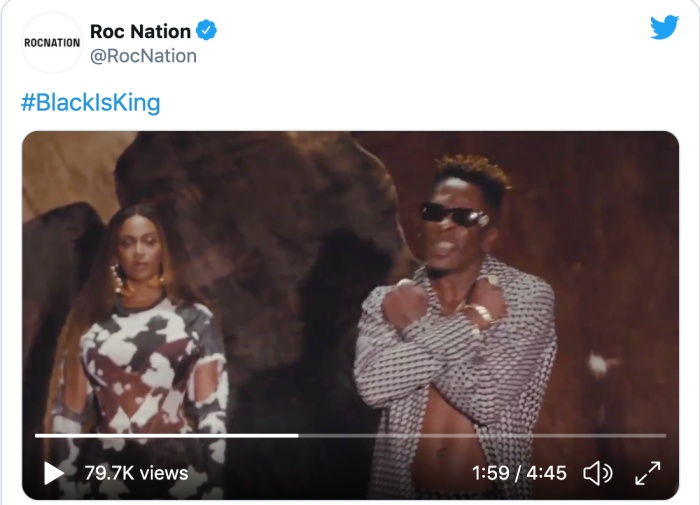 As at the time checks were made by Nkonknosa.com, the post had racked up a massive 4,400 retweets & comments and a whopping 14,400 likes and counting.
Many Ghanaians took to the comment section under the post to heap praise on Shatta Wale and also thank Jay Z for the gesture. Not long ago, there were speculations going round that Shatta Wale had high hopes of getting a feature from Jay Z.
Unconfirmed reports went on to add that Shatta Wale had indicated that he was going to save up money that would be accrued from the ALready project and use it to pay for a feature from the Empire State Of Mind hitmaker. The Already video which was released on July 31, 2020, has already been watched 6.5 million times on YouTube in just 2 days.
Source: NKONKONSA.com

Previous “GHANA IS PROUD OF YOU” – Information Minister Congratulates Shatta Wale For Beyonce Collabo
Next I ENDORSE AKUFO-ADDO FOR 2020 ELECTION; VOTE FOR HIM NOT MAHAMA – Afia Schwarzenegger Declares