I’M HAPPY YOU HAVE STARTED,WE WILL DRAG OURSELVES INTO THE MUD’ – Xandy Kamel Throws Shades

Ghanaian actress and television presenter, Xandy Kamel has allegedly declared her intent in going all out to get herself dirty with her boss, Stacy Amoateng.

Xandy Kamel who has been at loggerheads with Stacy Amoateng as they have been throwing shades at each other on social media despite working in one company, Angel Group of Companies took to her Instagram page and made a statement that appears as an indirect message to Stacy Amoateng.

The actress who recently celebrated her first marriage anniversary with hubby, Kaninja warned that someone as shameless as her cannot be shamed and she is happy that the popular media personality has started the war because she ready to expose her on social media.

She wrote: “How can you shame the shameless? I am happy you have started. Since you want it this way let’s drag ourselves out into the mud,”

Reports said Stacy Amoateng was working on Xandy’s show being taken off the air because she felt it was useless.

Xandy being the busy body that she is apparently found out the plans of Stacey and went straight to report Stacey to their overall boss, Dr Kwaku Oteng.  She allegedly badmouthed Stacy to the man which she found out.

Reacting to the post a follower identified as @silverbird_girl wrote;

‘These women are now using their brains to make money. Can’t you eople see that all the celebs are collecting adverts onto their chect now???? They just write such stuff so you bloggers will post and your followers will visit their pages and follow them so the can constantly get new customers for the business they advertise for. ?? Once they get new followers they will be doing post asking businesses to come and advertise with them. You will be blogging about their beef and they will use you to collect money. Meanwhile there’s no real beef ooo. ????????????. Your pages are helping to grow their pages and making money.. konkonsa foo you are helping them make money. ????????????’ 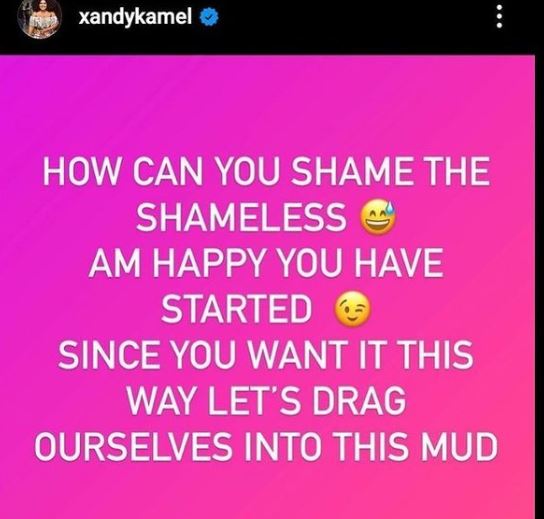 Previous FOOLISH MAN, TB JOSHUA DID NOT DIE BECAUSE HE CRITICIZED THE NATIONAL CATHEDRAL– A Plus Blasts Eagle Prophet
Next ‘WE HAVE A LEADERSHIP THAT IS NOT REPRESENTING US’- Blakk Rasta Joins #FixTheCountry Demo [VIDEO]