I’M GETTING CLOSER TO MY GRAVE, BE KIND TO MY KIDS WHEN I’M GONE – Joyce Dzidzor Mensah Drops Emotional Farewell Note

Ghanaian actress and former HIV/AIDS Ambassaor, Joyce Dzidzor Mensah has penned down an emotional note on social media subtly claiming that she is close to her grave.

Joyce was recently in the news when she told Ibrahim Kwarteng of Crime TV fame in an interview that her life literally plummeted after she decided to come out with her HIV status for which reason she was made the HIV/AIDS ambassador.

In a post she made on her Instagram page, Joyce Dzidzor Mensah revealed that she feels weaker by the day and is urging Ghanaians to be kind to her children when she is no more.

Recounting the pain she has been through living with HIV, Joyce disclosed that she was diagnosed in 2007.

“…..And when I started educating people on HIV, I encouraged others but always cried in silence after my talk….I maintained s smiling face so that most people with HIV will derive some strength from me. I have been admitted to the psychiatric hospital in Hamburg on 4 occasions. 2015, 2016, 2017, 2019 all in a psychiatric hospital for major depression.

Due to my constant admission, my son Prince was taken away from me. But now I’m weak…Please be kind to my children when I’m no more. Do not treat them badly for my mistakes. God bless you all,” 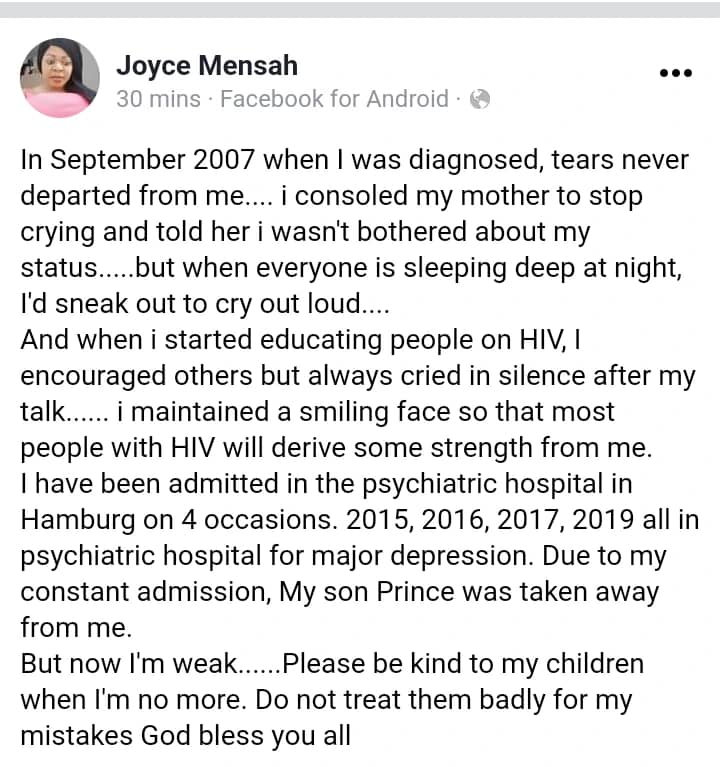 Previous MY LIFE WAS IN DANGER – Adwoa Saah Opens Up On Why She Moved From Ghana
Next ROBBERS STEAL 20,000 CEDIS FROM WOMAN IN BROAD DAYLIGHT AT ACHIMOTA [VIDEO]