WHAT ARE FRIENDS FOR: Togolese Star Emmanuel Adebayor Gifts Funny Face Another Car After His Recent Accident Making It Three In Total

Ghanaian actor and comedian, Funny Face after getting  involved in an accident with one of the cars his long time friend and the Togolese footballer Adebayor gifted him when he was on his way to see his children and Baby Mama Vanessa has received a new car from him.

Funny Face had earlier said in a video that went viral that on his way he got entangled with a careless driver who was driving a huge articulator and the driver crammed his car and he nearly lost his life but by God’s grace he avoided it. He narrated this incident in a video he shared and a brief caption he added to it on his social media page.

His long-time friend, Adebayor who has been showing much love to him for years now, gifted him another car to console him after escaping death. This is the third time the former Arsenal player has given a luxurious car to Funny Face while sustaining their friendship. 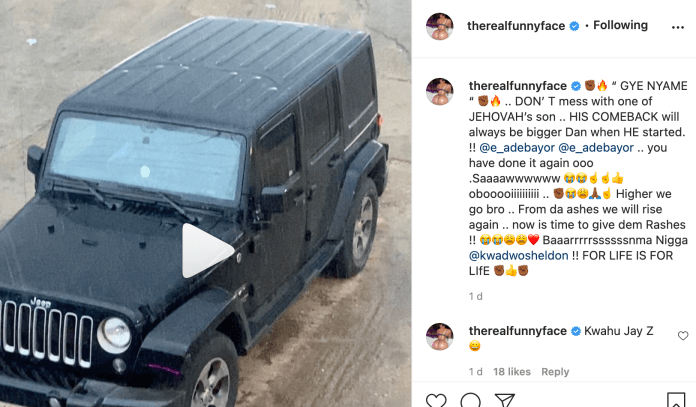 Previous WOMEN SHOULD THANK THEIR HUSBANDS FOR ‘CHEATING SAFELY’ ANYTIME THEY SEE CONDOMS IN THEIR POCKETS- Says Oboy Siki
Next ”I HAVE NOT MET HIM BEFORE”-Delay Reacts To The Proposal Of Gemann.