Heavily endowed Ghanaian socialite and video vixen, Hajia Bintu has shared her view on who is a better rapper between Medikal and Kofi Mole.

Mind you Medikal has won the ‘Best Rapper Award’ at the Vodafone Ghana Music Awards before when he grabbed the award in 2020 but lost it to Eno Barony in 2021.

Hajia Bintu, after listening to the two on their respective songs declared Kofi Mole a better rapper than Medikal and she beckoned her fans not to rain insults on her as she is only sharing her thoughts devoid of sentiments and favoritism.

The big-booty-social media sensation has triggered mixed reactions from music lovers and fans of the two rappers and whilst some argued that her assert is wrong, others said her remark is factual. 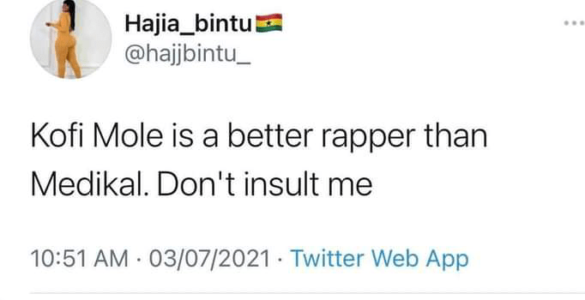 Previous MY FANS HAVE THREATENED TO UNFOLLOW ME IF I DON’T FORGIVE HER’ – Salma Mumin Speaks After Xandel Kamel’s Public Apology
Next OF ALL THE MEN I’VE TASTED, ASHANTI MEN HAVE THE SMALLEST MANHOOD – Afia Schwarzenegger Claims