Menzgold company limited has announced it will begin paying all of its customers their money from December 20, 2021. The payment, according to management, will run till June 30, 2022.

In a press release, the embattled company stated that the payment will follow a final audit of documents from customers who claim their monies have been locked up.

“We strive to complete the final phase of our audit endeavours and shall proceed to fully publish the following in the print and digital new media; list of all paid traders/transactors paid so far and list of all final eligible traders/transactions as well as the total sum of indebtedness by Menzgold Ghana Co. Limited.”

“Menzgold shall proceed to pay the final publicized list and total sum from the 20th of December, 2021 to 30th June, 2022 in our quest to give final closure to this very depressing matter and to restore our dear enviable Company’s integrity,” parts of the statement published on October 7, reads.

The company stated that it has already paid some “deserving” clients.

Meanwhile, the company in its press release stated that an earlier rigorous audit showed some documents they were presented with were either incomplete, fraudulent, or inconsistent.

Again, the company stated that it has also uncovered evidence that points to the fact that, some claimants purporting to have their funds locked up at Menzgold transacted through third parties.

These parties it said include some “unethical” Menzgold and Brew Marketing Consult staff members, adding that other supposed customers engaged via referrals and mostly close relations who took delivery of their funds.

This the company added was “under the pretext of signing them (customers) unto the Menzgold “Gold Vault Market” but ended up engaging in the many cryptocurrency products on sale on the Ghanaian market, with a monthly return on investment (ROI) ranging between 30%-60%.”

Thus, Menzgold is commencing the next and audit phase by interviewing these customers to ascertain the facts.

This would help the company “satisfy ourselves with regards to questionable adverse discrepancies and irregularities that characterize some transactions claims received for audit and its subsequent payment.”

“Hence, invitations would be extended to some individuals between the 3rd October 2021 to the 6th of December 2021 for interactions in a bid to justify discrepancies or irregularities.”

Following this exercise, Menzgold added they will send a petition to the Criminal Investigations Department of the Ghana Police Service to investigate all interdicted persons including alleged conspirators, purported clients, Menzgold and Brew Marketing staff members.

Read the press statement below: 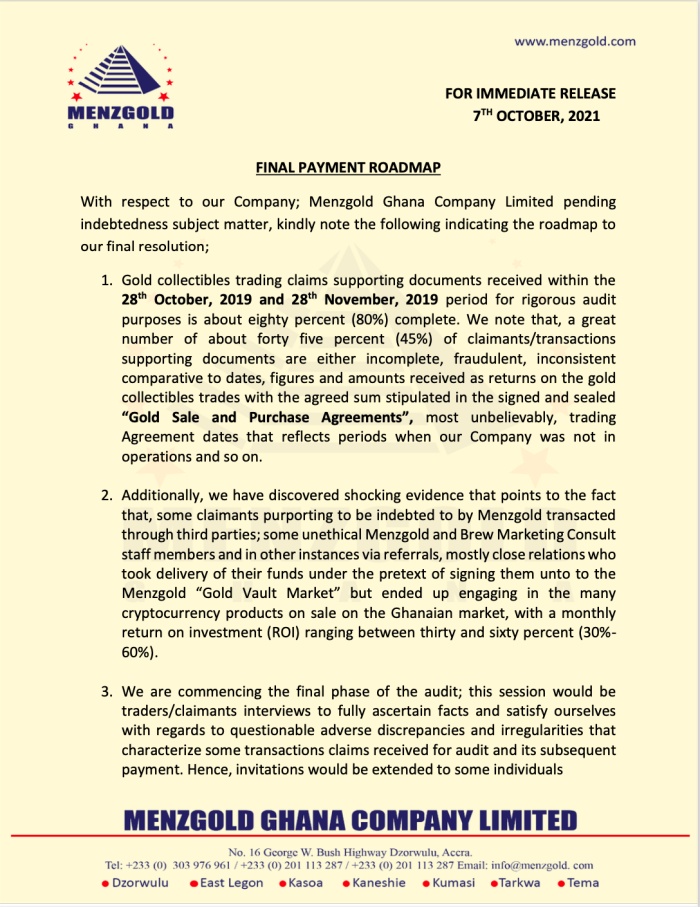 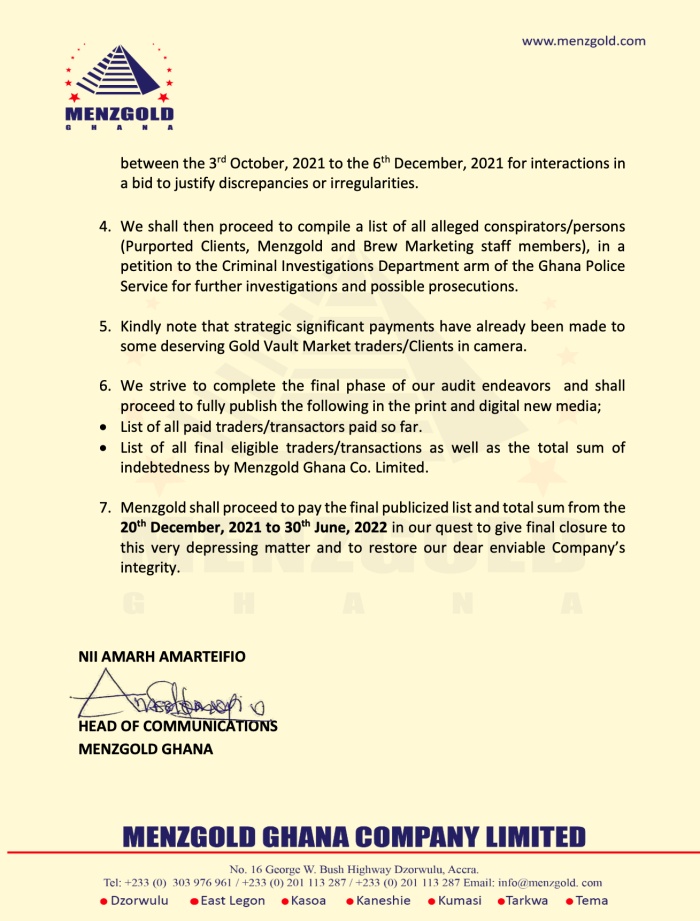