Ghanaian actress turned television presenter, Xandy Kamel has expressed her love for popular media personality and her boss, Stacy Amoateng amid their beef.

There have been several reports of a war ongoing between Xandy Kamel and Stacy Amoateng after the latter allegedly revealed plans to take down Xandy television show from Angel TV where she manages.

Xandy upon learning about this development was alleged to have reported it to their overall CEO, Dr Kwaku Oteng and their right escalated which saw Xandy throw subtle shades at Stacy on social media.

A recent Convo between Stacy and Xandy proves that the two are very cool and there is nothing like a beef going.

After Sharing the screenshot Xandy went ahead to add the caption, 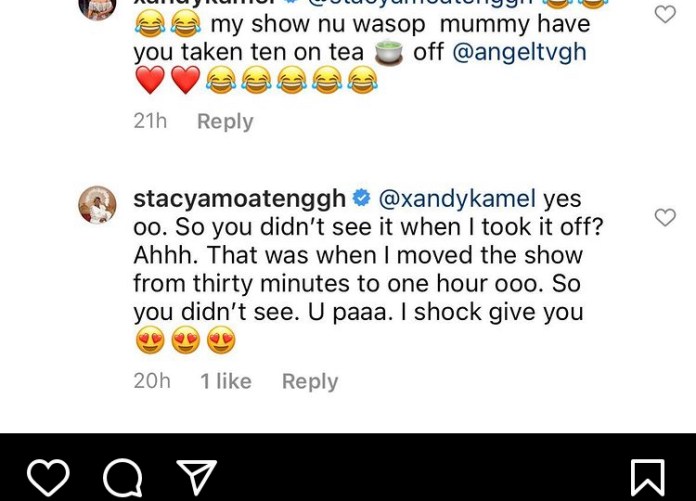 Previous WE STILL HAVE ANOTHER CHANCE TO MAKE IT HAPPEN’ – Beverly Afaglo’s Husband, Choirmaster Speaks After Fire Razed Down Their Home
Next “IF YOU’RE READY COME LET’S FACE-OFF, WHAT HAVE YOU EVEN ACHIEVED AS A RAPPER” – Amerado Dares Obibini [VIDEO]