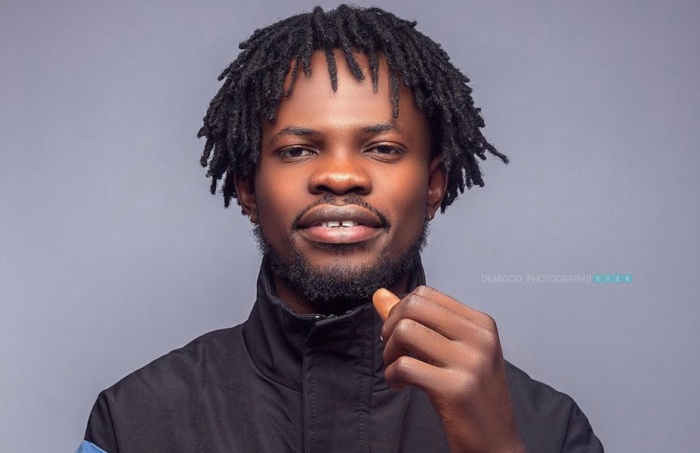 Ghanaian singer, Fameye recently shared a lengthy post on Twitter confessing to reckless driving on the Okponglo road where he also had an altercation with one University of Ghana student.

According to Fameye in a lengthy post on Twitter, last year he drove recklessly at the Okponglo, near the University of Ghana, Legon, and nearly had his reputation ruined by a student who tried to record him whiles stuck in traffic.

When the traffic light switched from green to red, a Trotro mate wanted to insult him but after realizing it was Fameye, he kept his cool only for the Legon student to get down and start insulting him.

He continued that those he was with at the time got down and seized the student’s phone to prevent him from posting the video on social media.

Let’s solve it on the street pic.twitter.com/113knDPCWj

In a thread on Twitter, the student with the handle Dave001 narrated what really transpired on that fateful day.

According to Dave001, all that Fameye said were fabricated lies with no iota of truth.

He called Fameye a ‘Bloody Liar’ and revealed that when he was smiling at the front seat when the unexpected had happened and never apologized.

Dave001 alleged that Fameye stole his iPhone 8 and the case was filed at the Legon Police Station.

“Fameye has told you all his story. It’s now time for me to tell mine. Lying to the whole world it was last year when everything happened on Sunday 9th January at Okponglo around 5pm.

I was heading to Legon campus with my friend to pick up something when this black Toyota Camry with a DV plate just cross [sic] our trotro on the Shiashie highway… I died for the first 3 seconds because the driver had to hit full brakes, and we all flew from our seats.

The driver of the Camry started switching lanes running away after what he did, my first though [sic] was that was a Legon student driving cos reckless was an understatement. That was suicide driving… the Camry was stopped by the traffic and me, my friend @NanaAppiah100 and the driver rushed to the Camry to confront the driver for the foolishness. [The] driver went and saw it was Fameye …Fameye claims he apologized?? HE IS A BLOODY LIAR [sic]. HE WAS SMILING IN THE FRONTSEAT, NONCHALANT.

That really annoyed me cos you try and kill me, and you say nothing about that? His team in the car said nothing to all waiting for green light to drive off.. I took my phone and began filming for evidence because I can’t get away like that. His boys dropped and attacked me, hit me, they hit my friend and tried to steal his phone too though he wasn’t recording .. Fameye himself then got out of the front seat attacking the driver asking him NA CAR BEN NA WOTWI?

He and his team drove off after, and we filed a police case immediately at the Legon Police Station.

He stole my iPhone 8, yh it means nothing to you but it meant the world to me, and you took it… 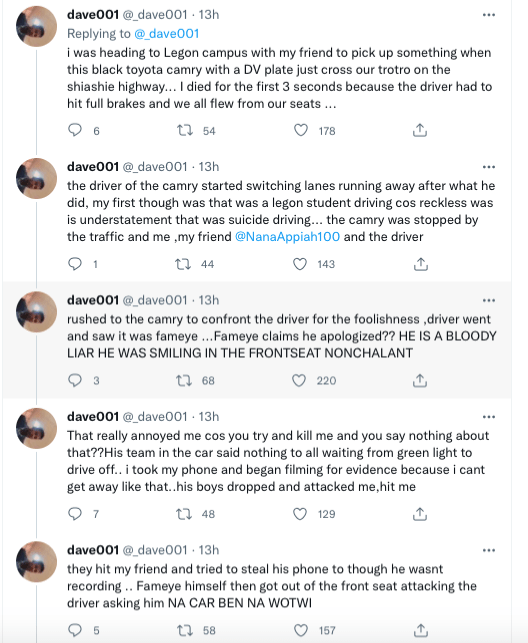 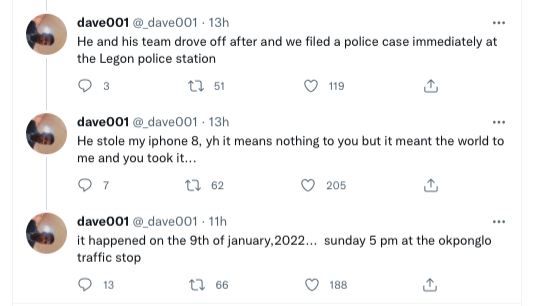