Just as a lot of comedians had feared after Will Smith ‘opened the floodgates,’ the wife of ace broadcaster, Israel Laryea, Louisa Laryea has taken to Facebook to insult Ghanaian comedian OB Amponsah over some jokes he made about her husband.

Recall that OB Amponsah, one of the mainstream GH comedians joked about Isreal Laryea’s horrific Covid-19 experience plus his self-imposed quarantine that came with it him at his solo comedy show dubbed, ‘Popular But Broke’ which was staged last year.

OB’s joke created the impression that Isreal has not reached the level where he could own a mansion and the boys’ quarters wherein he said he took refuge to quarantine himself from the dreaded disease which is gradually fading into oblivion.

In a Facebook post, Mrs. Laryea warned that if the comedian proceed to tread on this nonsensical path, then what happened to Chris Rock at the 94th Oscars would inevitably happen to him as well.

“There’s a very STUPID miserable local comedian so-called by name #OB_Amponsah. Obviously, another badly brought up child. Misbehaving all over the place in the name of comedy,” she wrote. 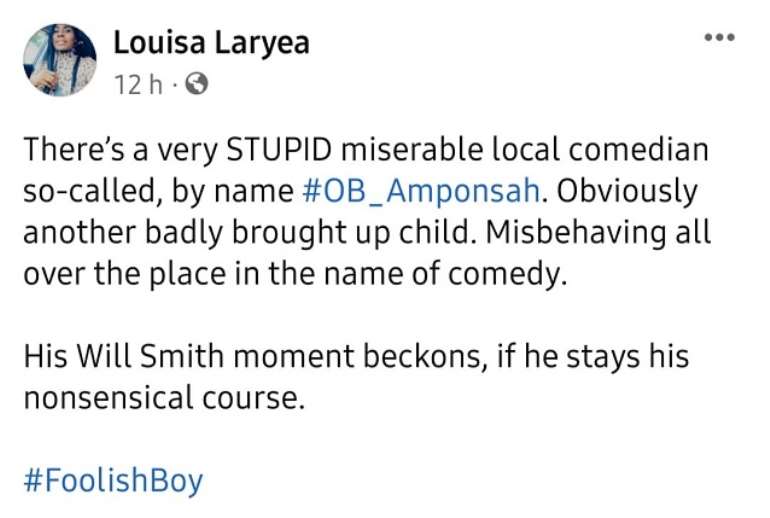