SARKODIE BLASTS MEDIA HOUSE FOR MISREPRESENTING HIS PICTURES WITH GYAKIE

Ghanaian rapper Michael Owusu best known by his stage name, Sarkodie, has taken a swipe at a popular online media platform for misrepresenting some photos he took with Gyakie.

Gyakie recently released some photos from her photoshoot on her instagram. One of the photos was taken with Sarkodie.

Some blogs reported the photos and speculated that there was some project cooking between the rap legend and Gyakie.

Sarkodie quickly denied the project speculations According to him, he just happened to be in the area with Gyakie and decided to take a few shots with her. Aside that, there is nothing cooking, he said.

But according to the rapper, that is not what his disclaimer meant. He jabbed the media house for not clarifying before putting the news out. 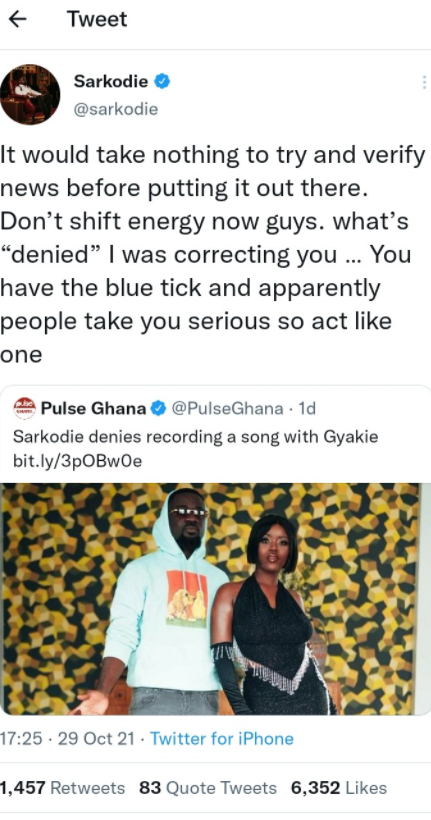 Previous I FEEL UNCOMFORTABLE ANYTIME I WATCH MY KISS WITH KIDI, MY FATHER ASKED ME WHO IS THAT BOY? – Cina Soul Reveals
Next YES, WE ARE NO LONGER TOGETHER BUT IF YOU SLEEP WITH HIM, HIS D!CK WILL GET STUCK IN YOUR VAJAYJAY BECAUSE LEGALLY I’M STILL HIS WIFE – Xandy Kamel Warns