Magluv, Ghanaian fashion entrepreneur and business partner of award-winning Dancehall musician, Shatta Wale has called out Shatta Wale’s ex-girlfriend and baby mama on social media over her crashed relationship with the singer.

Shatta Wale and Michy fell out of their relation in 2019 for reasons yet to be known after the latter parked out of Shatta Wale’s house and they cited personal reasons why they had to live their separate lives.

However, it appears there are hidden issues and information that has been swept under carpet but a feather ruffled on Magluv might expose the main cause of Michy and Shatta Wale’s break-up.

In the most recent post by Michy on social media, Michy threatened to expose Michy as she gave her 24 hours to tell Ghanaians the truth about her relationship or better yet, her stint with Nana Appiah that led to her leaving the ‘Melissa’ singer’s house.

Magluv said declared that enough is enough and she is doing being used by Michy to cover her shame as a victim because she has a family to protect and a lot of people who look up to her.

Anyway, NKONKONSA.com cannot confirm if the Nana Appiah Magluv was talking about is the CEO of Zylofon Media, Nana Appiah Mensah, who is the former executive producer for Shatta Wale. 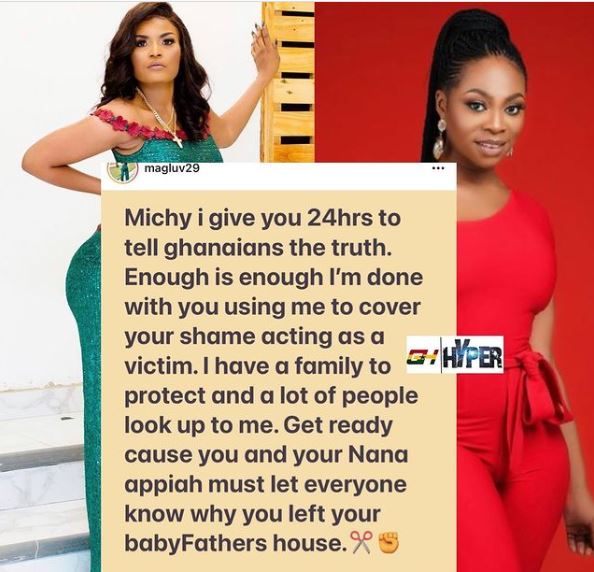