Repented Ghanaian cyberbully and blogger, Journalist Albert has allegedly truncated his business deal with media network EIB amid a new role at the station.

Albert who was humiliated by television presenters, Nana Aba Anamoah, Serwaa Amihere, and Bridget Otoo on live television during his audition at the ‘Next TV Star’ was later offered a job by the boss of EIB Network, Bola Ray to be the ambassador of the anti-cyberbully campaign.

However, their new alliance might not see the light of day as Albert has announced that he will not work with EIB and go off social media.

In a series of tweets, Albert Nat Hyde aka Bongo Ideas claimed that upon advice from his family, he has decided to take a social media break and apologized to those who are disappointed by his decision. 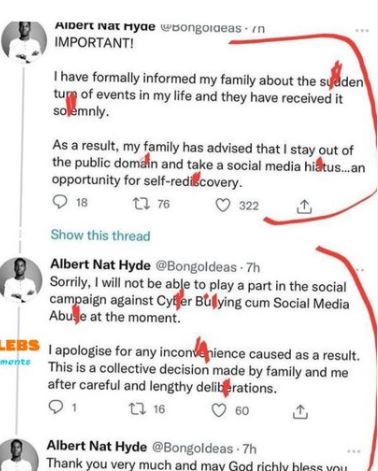