Fast-rising Ghanaian singer, Black Sherif has taken to social media to share a photo of Auntie Marie, the woman he mentioned in his viral song ‘Second Sermon’.

Black Sherif became an internet session after his song ‘First Sermon’ was released attracted applause from top musicians such as Sarkodie, M.anifest and others.

In his ‘Second Sermon’, one of the lines that have got many eager to know who that woman is ‘Aunti Marie nim s3 this be the life we dey i dey live for here’ meaning Auntie Marie isn’t aware of the struggles he’s gong though in the Capital city.

The Bogoso-bred singer gave a shout-out to Auntie Marie in his ‘Second Sermon’ song but from what we gathered, Auntie Marie is apparently his mother as the photo posted on social media by Black Sherif himself shows them having a video call conversation. 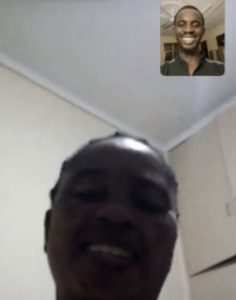