Ghanaian singer, songwriter and instrumentalist, Kidi has been called out by the General Overseer of the International Central Gospel Church, Pastor Mensa Otabil on social media following his clash with gospel artiste, Diana Hamilton.

Kidi and Diana Hamilton have been the topic of discussion on social media after the former lost the most coveted award, ‘Artiste of the Year’ to Diana Hamilton at the recently held, Vodafone Ghana Music Awards 2021.

The Lynx Entertainment who also won some awards on the big night allegedly walked out of the auditorium after Diana Hamilton was declared the overall ‘Artiste of the Year 2021’ and this generated an outrage on social media between fans of the two artistes as some blasted him to trying to beat a gospel musician who does ‘God’s work’.

Apparently, Kidi missed church service the following day on Sunday after the awards and noticing his absence, the church in a post on their Facebook page publicly called out Kidi and reminded him of coming to church the next Sunday.

@kiDiMusic hope to see you in church tomorrow. Been a while 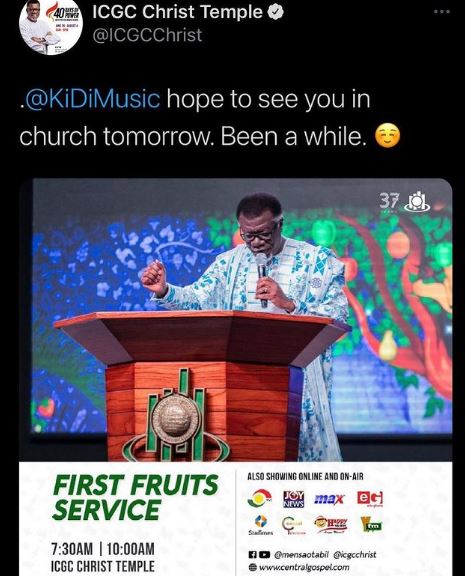 Previous I’M READY FOR YOU’- Tiwa Savage Assures Stonebwoy Of Collabo After Meeting Him
Next Sarkodie Postpones Release Of ‘No Pressure’ Album, Announces New Date