KIDI JUST DROPPED A BANGER, PUSH IT AND STOP TALKING ABOUT MY ‘HOLY KISS’’- Shatta Wale To Critics

Dancehall musician, Charles Nii Armah Mensah professionally called Shatta Wale has told those criticizing him for kissing his bodyguard, Shatta Kumodji in a viral to channel their energy in promoting KiDi’s ‘Touch It’ remix song which featured American rapper, Tyga.

Recall that KiDi’s global phenomenon ‘Touch It’ has been remixed and it features Tyga which was dropped on February 16.

Wale in his admonishing said journalists who are still dragging him over his ‘holy kiss’ should give him a moment of respite so they could use that time to push KiDi’s song. 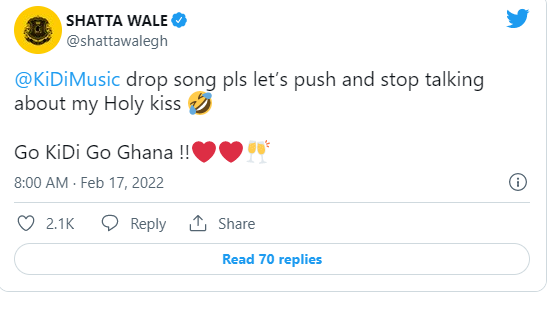 Previous STONEBWOY’S LAWYER AND HIS FIANCEE TIES THE KNOT IN SIMPLE AND CLASSY CEREMONY
Next “DO YOU WANT ME TO SOUND LIKE KIDI OR KUAMI EUGENE BEFORE YOU SUPPORT ME?” – Camidoh asks