”I HAVE NOT MET HIM BEFORE”-Delay Reacts To The Proposal Of Gemann.

Ghanaian TV personality, Delay reacts to the proposal of Former artiste Gemann who shared his feelings and attempt to marry her.

It would be recalled that Gemann revealed on Kingdom Plus FM that settling down with Delay is one of his biggest life goals. According to him, he came all the way from the United States UK to Ghana just because of Delay.

“Marrying Delay is one of the biggest plans I intend to achieve.

“After I lost my ex-wife, I have not married any other woman. I travelled all the way to Ghana to purposely marry Delay.” he told Fifi Pratt.

His proposal has gone viral and travelled all over but there’s only one problem – Delay apparently does not feel the same way.

A fan went into her comments on social media to prompt her that she has a marriage proposal out there from Gemann.

“Is it true you’re getting married to Gman?’ the fan asked.

Delay response is enough to kill that man prematurely.

“I’ve never met him before, it’s called clout chasing,” she hit back 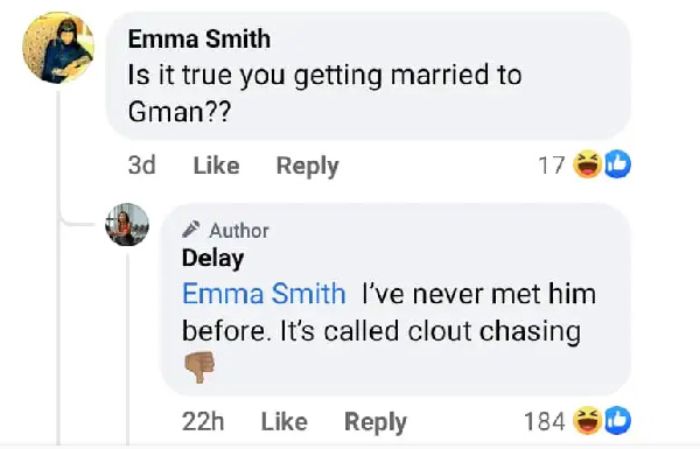 Previous WHAT ARE FRIENDS FOR: Togolese Star Emmanuel Adebayor Gifts Funny Face Another Car After His Recent Accident Making It Three In Total
Next THE SAME SON YOU DISOWNED AFTER DNA PROVED-Asamoah Gyan Slammed After Wishing Son On His Birthday