THOSE CRITICIZING SAMIRA BAWUMIA ARE ENVIOUS OF HER- Nana Aba Anamoah

Ghanaian media personality, Nana Aba Anamoah has lashed out at those criticizing the second lady, Samira Bawumia on social media.

Some Ghanaians have raised questions about Samira Bawumia’s effort in governance after parliament revealed the salaries she alongside the First Lady will be paid by being the spouses of the President and Vice President.

Whilst some debate Samira Bawumia’s contribution to helping Ghana become a better place to receive such hefty amount of money, some Ghanaians have made certain comments trying to downgrade her and the GHOne TV presenter has slammed them for being ignorant, petty and envious of him as she described their comments as horrible.

In another post on her Twitter age, Nana Aba Anamoah pointed to the fact that they can’t stand strong personalities who are beautiful through no fault of theirs and urged them to get a life.

You’re on social media attacking her! Keyboard warriors. You wake up angry! You can’t stand strong personalities who are beautiful through no fault of theirs.

Do you know what Samira does from her small office?

Let her attempt to be all over with her work, you’ll be the same people who will jump on mountains and scream out that she’s trying to upstage the First Lady or compete with her. Get a life.” 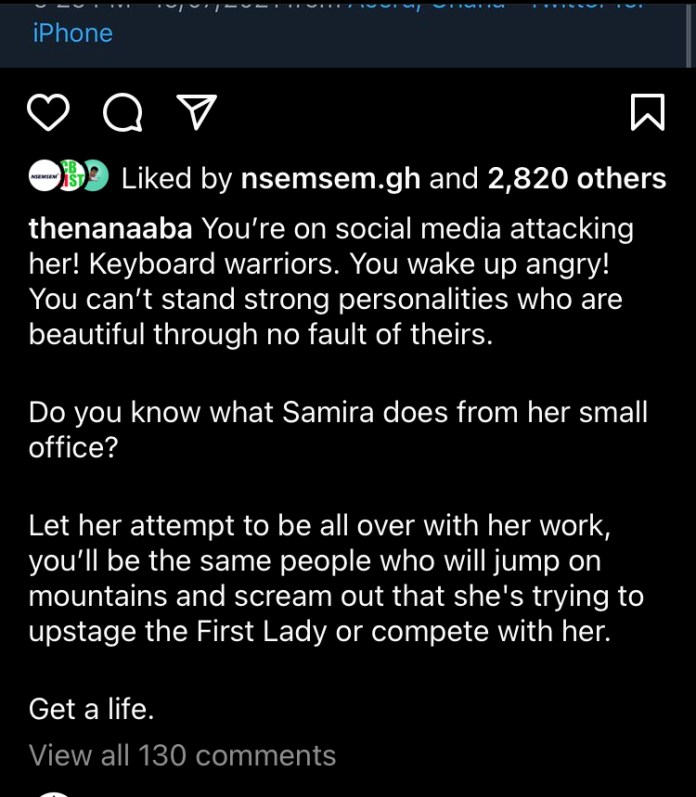