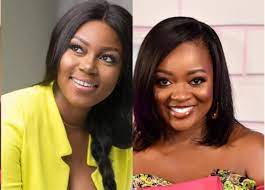 Ghanaian actress, Jackie Appiah has subtly shaded colleague actress Yvonne Nelson after she complained of Jackie failing to feature in her ‘Fix Us’ movie.

Yvonne exposed the wicked side of Jackie during an interview where she was promoting her Fifty Fifty movie.

During the interview while promoting her ‘Fifty Fifty’, movie, Yvonne noted that she was unable to cast her colleague actress Jackie Appiah because she had previously turned down a role in her previous movie, ‘Fix Us’.

Jackie Appiah captioned the video, ‘We gotta start making changes’ and asked fans to watch to the end where she noted that ‘she gotta get paid’.