‘HE IS A PROPHET, NOT YOUR VILLAGE HERBALIST’ – PROPHET BADU KOBI’S DAUGHTER BLASTS CRITICS

Jessie Kobi, the daughter of popular Ghanaian preacher, Prophet Emmanuel Badu Kobi has descended heavily on some Ghanaians who are trolling and criticizing him on social media over his failed prophecies.

Prophet Badu Kobi came under attack by some Ghanaians especially young boys who had lost so much money because he prophesied that England was going to win the EURO 2020 tournament which did not happen.

The General Overseer of the Glorious Wave International Church was heard telling his congregation during a church service ahead of the EURO 2020 final between England and Italy that he saw England winning the trophy but at the end of the match, Italy emerged winners.

Before that, he had prophesied that Brazil will win the Copa America trophy in the final match against Argentina.

In a new development, Jessie Kobi has jumped to the defence of her dad pointing to the fact that her father is a prophet not a herbalist and she averred that things can happen between the time a prophecy has been made and the time it takes place.

“between the time a prophecy is given and the moments it’s supposed to happen, there is always a change in the spiritual“.

“it happened in Egypt when God told the Israelites he would rescue them at 400. Before you come at my father ask questions as to what changed. Don’t criticize what you don’t understand, Remember he is a prophet, not your village herbalist“. 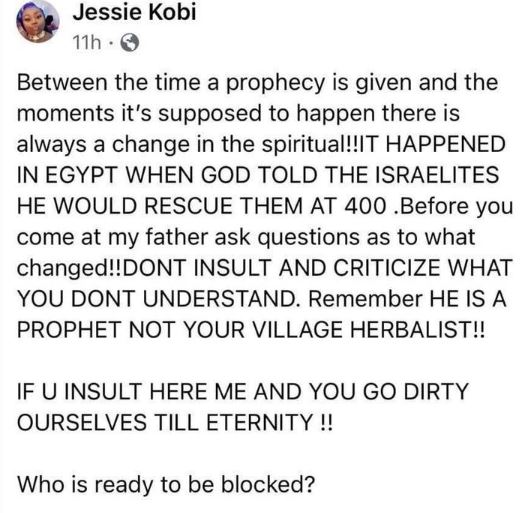 Previous BULLDOG CAUGHT MICHY & NAM1 IN A COMPROMISING POSITION IN HIS OFFICE’- BLOGGER ALLEGES
Next CIGARS CAN’T HELP YOU BOY, GET TREES IF YOU WANT TO GET HIGH – Stonebwoy Indirectly Jabs Sarkodie?