MTN REVEALS GOVERNMENT FORCED THEM TO INCREASE THEIR PRICES

MTN Ghana has offered an explanation as to the ridiculous upward adjustment in their call and data (Fibre broadband and TurboNet bundle) packages in recent times.

Subscribers of MTN would have realized in recent times that the network’s prices for Mashup and internet are far expensive.

Before the implementation of the new tariffs, GHS 300 worth of data amounted to 393.58GB and 332.57GB Mtn Fibre broadband and MTN TurboNet respectively.

But now the same amount will give customers 231.08GB on MTN Fibre Broadband and 190.23GB TurboNet.

However, In an explanation offered by one of the Network’s Customer Relations personnel via social media, in response to a query from a customer, MTN is basically not at fault here.

According to the said customer service representative, MTN Ghana is only responding to an order from the regulator (Government) to adjust their prices upwards in order to allow for fair competition with other networks.

This has led to many Ghanaians wondering the sense in such a directive by the regulator considering the fact that competition is supposed to bring a reduction and not an increase.

Meanwhile, Government as the regulator which is the NPP’s Akufo Addo led administration is yet to respond to the issues. 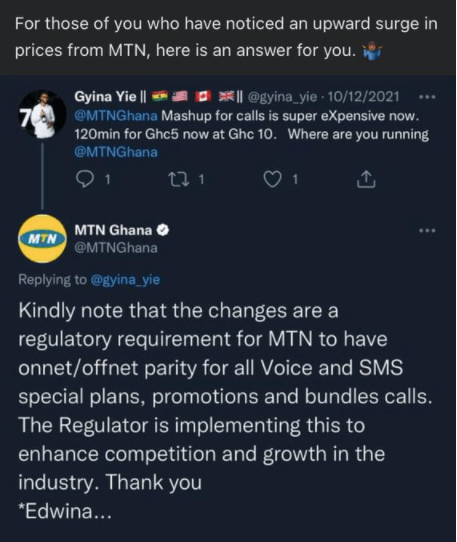 Previous THIS ALBUM WILL BE A BLESSING TO ME – Stonebwoy
Next FAKE TAKORADI KIDNAPPING: I SAW MY WIFE’S PREGNANCY – Husband Tells Court