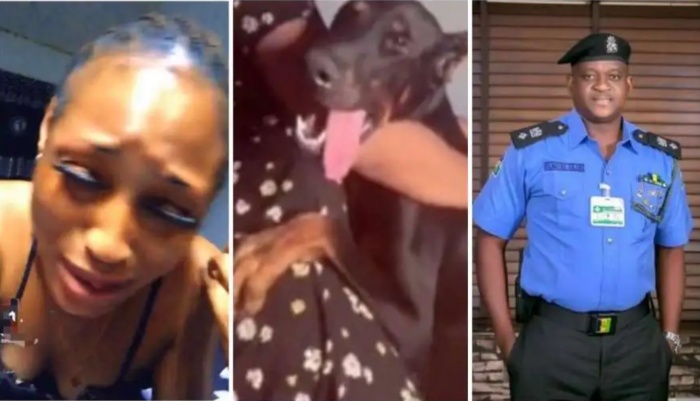 The Nigeria Police Service has launched a search for a lady captured in a viral tape having ѕєχʋαl iŋtercoʋrse with a dog.

The internet, particularly Twitter, has been on rampage for the past few days following reports of some ladies desperately slɛɛpiŋg with dogs for huge sums of money.

Videos of young ladies either allowing dogs to go down on them while others engage in the ‘d0ggystyle’ position with them have since gone viral with a lot of backlash from the public.

In the midst of the controversy, a lady in one of the viral tapes took to social media to justify her actions.

“What is the big deal there? I only slept with a dog; I didn’t kill somebody. You, in your life, you have done worse and besides, have you seen N1.7million before? As if it’s a big deal. And mind you, I’m not infected or anything. Stop dying on the matter, I’m enjoying the money,” the said lady named Veegodess stated.

But in a new twist to events, a Nigerian Police Public Relations Officer, Muyiwa Adejobi, has established that such acts won’t be tolerated.

According to him, the Criminal Code Act and the Penal Code Act inhibit human beings from slɛɛping with any type of animal adding that it attracts up to 14 years imprisonment.

“I really want us to take necessary action on these ladies that are involved in unnatural offences (including bestiality) and post them online. We want to urge you to give us any useful information on how to get these ladies. We need to fish them out please, particularly the one who came out to speak.