The President of Ghana, H.E Nana Akufo-Addo has announced that Tokyo 2020 bronze medalist Samuel Takyi will receive a Toyota Camry car, $10,000 in cash, and a further $20,000 to be put into a career development fund for him.

The President made the announcement when the Ghanaian delegation for the Tokyo Olympic Games arrived at the Jubilee House in Accra on Friday, August 20, 2021.

Furthermore, each member of Ghana’s 14-athlete contingent will receive $5,000 for their efforts at the games.

The president also presented medals to all of the athletes and officials who participated in the games in recognition of their efforts.

President Akufo-Addo announced that the government will spend $150,000 on bonuses for Team Ghana athletes competing in the Tokyo Olympics.

“For the first time ever, a Ghanaian athlete, Samuel Takyi, was selected to represent Africa at the closing ceremony of the Olympic Games,

For the first time in the history of the 4th Republic, Ghana won a medal at the Olympics.

“Out of the 52 African countries that participated at the Olympics, Ghana placed 10th on the continent.

“This should spur us on to even greater heights in future competitions.

“On behalf of the people of Ghana, a say a big hearty ayekoo to all of you. You made the country proud,” President Akufo-Addo said.

Takyi’s bronze medal in the boxing featherweight division is the country’s first medal since 1992, and it brings the country’s 49-year wait for an individual medal at the multi-sport event to an end. 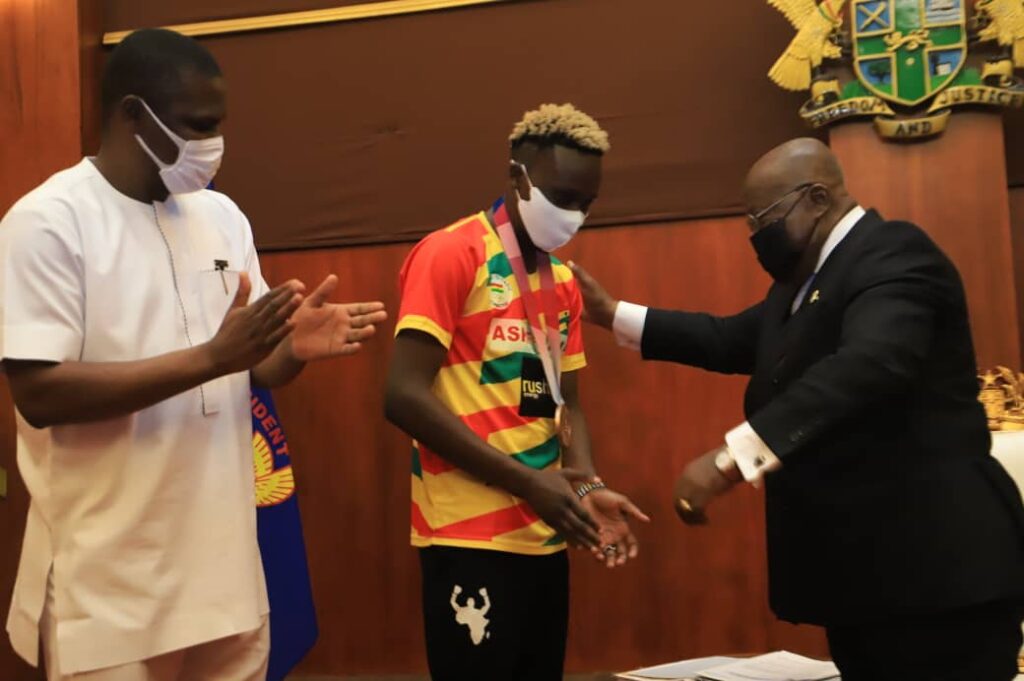 Previous 1ST LADY REBECCA SURPRISES 2ND LADY SAMIRA BAWUMIA ON HER BIRTHDAY
Next THERE’S NO PLACE LIKE HELL, I DO NOT BELIEVE IN JESUS – Rapper, Pure Akan

SELF-RESPECT HAS NOTHING TO DO WITH NUD!TY – Sister Derby

The issue of women wearing skimpy attire or exhibiting n.dity has been raised by Sister …