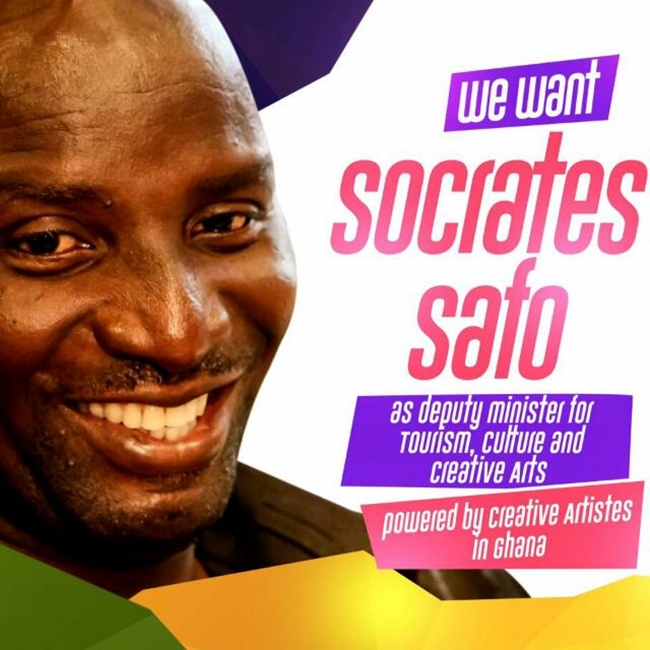 President Nana Akufo-Addo has released the full list of Deputy Ministers but popular Film Producer, Socrate Sarfo’s name is conspicuously missing contrary to expectations that Socrate would be appointed as the Deputy Minister of Tourism, Culture and Arts Ministry.

This has gotten some section of the entertainment industry and showbiz enthusiasts disappointed. Socrate Sarfo has being in the new since January, with a campaign to get him appointed as the deputy minister of Tourism, Arts and Culture.

However, President Nana Akufo-Addo has appointed Dr Ziblim Barri Iddi to the Tourism, Culture and Arts Ministry as Deputy Minister.

Dr. Iddi, a lecturer at the Political Science Department of the University of Ghana, was among a list of Deputy Ministerial nominees released on Wednesday, March 15, 2017. President Akufo-Addo nominated Catherine Ablema Afeku as the minister for Tourism and Creative Arts.

The race for who becomes her deputy became a matter of public debate, when the likes of Socrate Sarfo, Kojo Antwi, Mark Okraku Mantey, Juliet Asante and others were all mentioned as possible names to be considered for the position.

Movie producer Socrate Safo had mentioned that he will accept to serve as deputy minister in Nana Akufo-Addo’s administration if the offer was made to him.

Members of the Creative Arts for Change were rooting for him to be named as Deputy Min. for Tourism, Culture & Creative Arts.

According to him, they were championing for him to be deputy minister of Tourism, Culture & Creative Arts because they wanted someone who understands their challenges.

People criticized Socrate sarfo, insisting he does not qualify for the position.

Socrate Sarfo declared support and campaigned for the New Patriotic Party and Mr. Akufo-Addo in the 2012 and 2016 polls and the portfolio is seen by many as a reward for his efforts towards the party’s success at winning back power.