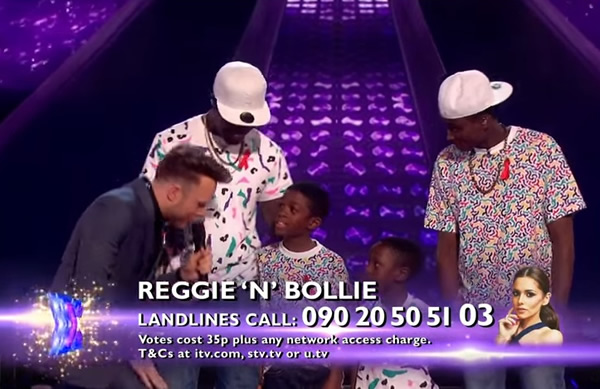 Ghanaian UK based duo Reggie N Bollie are still soaring in the ongoing X Factor 2015 and they not leaving anything to chance.

Their families have been strongly behind them all through the X Factor experience, and this week, they decided to bring them on stage.

Reggie’s two sons and Bollie’s step son joined them to do the popular Ghanaian dance Azonto on stage. “It’s such an amazing feeling to have our kids with us on stage”, Reggie said ahead of their performance.

Sunday night’s result show saw the shocking exit of Filipino girl-group, 4th Impact from the X Factor UK music reality TV show.  But there was good news for Ghana’s very own Reggie Zippy and Bollie (Reggie ‘N’ Bollie) who advanced to the semi-finals of the competition.

Singing a mash-up of (Whip/Nae Nae) by Silentó selected for them by the public for Jukebox week with Fuse ODG’s Azonto, Reggie N Bollie performed with their characteristic high energy for the jaunty song. It all looked like so much fun that mentor Cheryl couldn’t help get up and join them in an impromptu dance-off.

Their performance in the series looked so much fun that their mentor Cheryl couldn’t help but get up and join them in an impromptu dance-off. Her spontaneous display got some viewers confused, but many thought it was pretty entertaining to see the judge take to the stage.

Watch their full performance below: