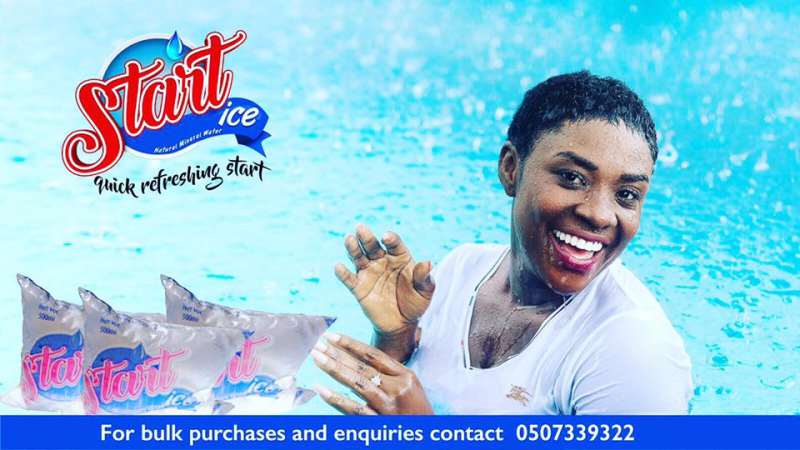 The “Adanfo Bone” actress has confirmed in a recent interview with Peacefmonline.com, that she is now into productions of mineral water in commercial quantity.

“I needed another business aside acting and my media work. So I consulted some prominent businessmen, I had a lot of ideas and suggestions and I ended up with mineral water production”, Emelia confirmed.

She added that “I have been planning and preparing for this over a year now, and all documentations are now set to go commercial. So thank God Start Ice natural water is now selling at the market”.

Emelia who now owns a water processing factory based in Kumasi fully furnished with a number of water filter machines and 3 delivery cars for distribution, said business has been very encouraging since she started distributions few weeks ago.

Emelia however, denied speculations making rounds that she is quitting acting to go into full time water production and to all those who think she is going into water production because the movie industry is dying, this is what Emelia had to say;

“Not at all! I just need another business aside acting plus the movie industry is not dying. Its just that it is not like before but I believe it will pick up soon because as we speak now, I am on set filming and I am still premiering my movie ‘Adanfo Bone’ and I will still continue to to act and produce movies”.

Ememia Brobbey’s START ICE NATURAL WATER is not available only in rubber sachets in the Ashanti region and its environs and she intends to expand into small and large plastics and to spread distribution into other regions.

Emelia is a teacher by profession having undergone training at the Presbyterian Teacher Training College. The actress also holds a diploma in Journalism, an ICM Certificate in Broadcast Journalism and a Degree in Human Resource Management.