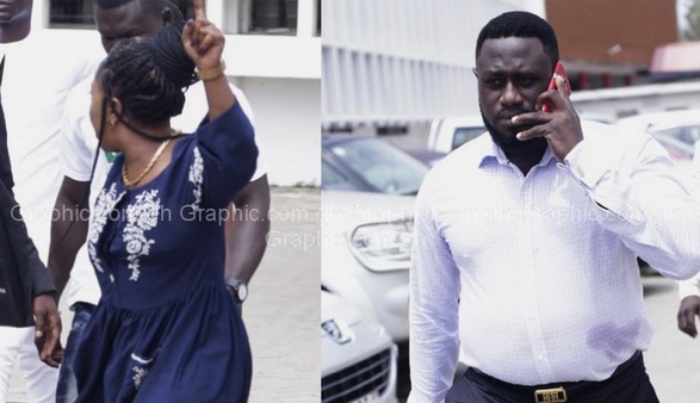 Television host and actress, Afia Schwarzenegger, and her husband, Lawrence Abrokwa, have been ordered by the Accra Circuit Court to refrain from any acts detrimental to their well-being.

The order, according to the court, presided over by Mrs. Jane Harriet Akweley Quaye, would be in full force until the final determination of a case in which Abrokwa is alleged to have assaulted the actress.

“All parties involved in the case must cease fire until the final determination of this case,’’ the presiding judge ordered.

Abrokwa was put before the court on Monday following a video that allegedly showed him threatening to pour acid on his wife, known in private life as Valentina Nana Agyeiwaa, and another man after he (Abrokwa) had seen them in bed.

He has pleaded not guilty to two counts of domestic violence, assault, threat of harm and publication of obscene material.

The court order followed a plea by the prosecutor, Chief Inspector Maxwell Oppong, for the court to restrain Abrokwa, after he (prosecutor) had accused Abrokwa of spreading the actress’ nude video.

He also accused counsel of Abrokwa, Mr Maurice Kwabena Ampaw, of making derogatory statements about the actress and pleaded with the court to restrain the counsel.

“The security of the complainant (Afia) is in danger. She needs to be treated with dignity because she is somebody’s daughter, sister and mother,’’ the prosecutor said.

Mr Ampaw, however, rejected the prosecutor’s assertions, describing them as an attack on his person.

According to him, he had never made any derogatory statements against the actress since the case ended up in court.

Afia and Abrokwa appeared in the courtroom with a number of their respective supporters, with the actress guarded by about five heavily built men.

Journalists had a torrid time trying to take pictures of Afia after the court proceedings, as her bodyguards shielded her from the numerous lenses that focused on her.

Meanwhile, the court has granted bail to Abrokwa in the sum of GH¢20,000, with three sureties, all of whom must be gainfully employed.

That was after Mr Ampaw had impressed on the court to grant his client bail.

“The accused will make himself available at any day or time the trial is heard,’’ he said.

Chief Inspector Oppong told the court that the two former love birds were legally married and lived together in a house owned by Afia, but due to persistent misunderstandings, Abrokwa packed his things and left the house.

He said on August 29, 2017, Afia’s house help informed Abrokwa that a male visitor had been visiting the wife and that he was currently in the house.

“Based on that information, Abrokwa armed himself with a kitchen knife and a bottle containing a substance purported to be acid and proceeded to the house. He found a car which he believed belonged to the visitor, deflated two of the tyres and gained access to the room through the back door, with the assistance of the house help,’’ he said.

The prosecutor explained that Abrokwa forced himself into the bedroom, and with his phone camera on, he ordered Afia and the man to allow him to film them or they risked being bathed with the acid.

“The visitor managed to escape during the process, but Afia was prevented from doing so by Abrokwa. He ordered her to go on her knees and declare that she was a prostitute, with the acid in his hand. He continued with the video while Afia was naked and pleading with him to stop,’’ the prosecutor added.

Chief Inspector Oppong further stated that Abrokwa assaulted Afia and chased her out of the house naked until she was rescued and clothed by some neighbours.

The video, he said, later went viral on social media.

He, however, disclosed that on September 13, 2017, the Ghana Standards Authority found out that the content of the bottle was actually water and not acid.

Previous “I AM UPSET WITH OBRAFOUR” – Pappy Kojo
Next End of An Era: P-SQUARE FINALLY SPLIT