Barely a day after run rife that Nana Opoku Kwarteng, father of the late Ebony Reigns says Bullet gave him only GH¢2,000 out of the GH¢39,999 he got from tickets sold at the tribute concert, the artiste manager and his label have responded shiftly, with a strong statement stressing that RuffTown Record “is no more interested in releasing unreleased songs” of the deceased.

“…the label will not be releasing any song from the 90s Bard Gyal. RuffTown Records owns 60% royalties of Ebony Reigns unreleased songs but we are giving away full ownership to her father, Mr. Opoku Kwarteng” portions of the statement signed by Ricky Nana Agyeman (bullet) read. 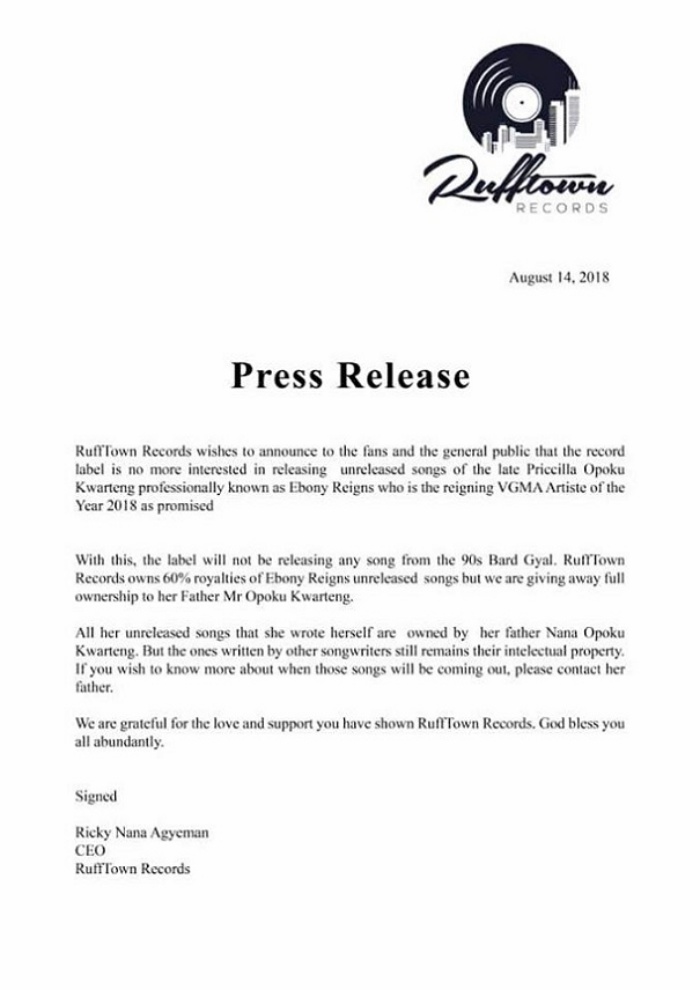 “All her unreleased songs that she wrote herself are owned by her father but the ones written by other songwriters still remain their intellectual property. If you wish to know more about when those songs will be coming out, please contact her father,” it added.

Bullet while sharing the statement on his Facebook wall suggested that Mr. Kwarteng has been spreading lies about the gate proceeds and further recounted instances where he (Bullet) made sacrifices in different forms.

“The funeral I spent over 5000 cedis being payment of bands men. You didn’t say thank you and I didn’t even ask you to give it back to me from all the cash ppl donated cos I was doing for ohemaa. Tribute concert you brought your men to be at the gate to check how much we will make, whatever we made was counted by the bank in presence of your men, kasapreko and rufftown. Everything was transparent so why come attack me?” he queried.

Bullet could not fathom why Ebony’s father is bent on defaming him as he revealed that Mr. Kwarteng has received what is due him and even more as regards the works of his late daughter. 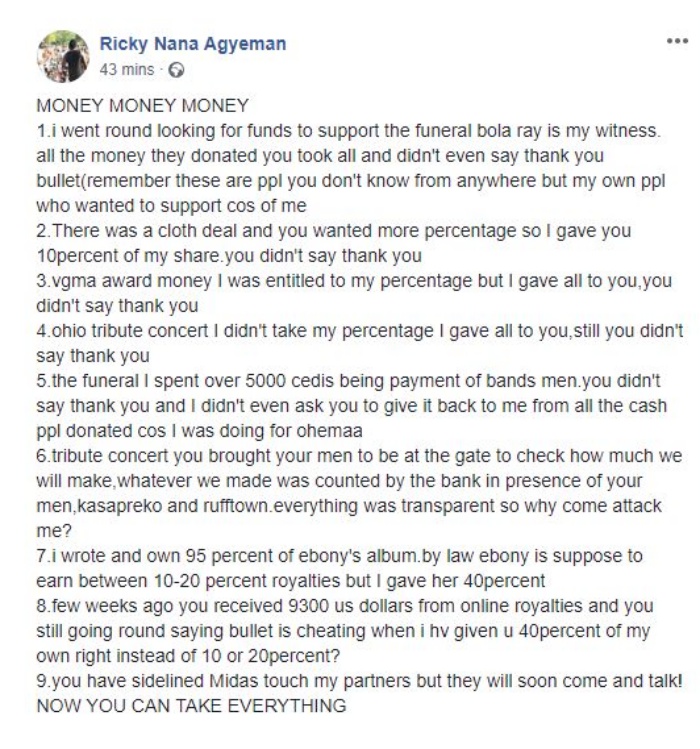 “I wrote and own 95 percent of ebony’s album.by law ebony is supposed to earn between 10-20 percent royalties but I gave her 40percent. Few weeks ago you received 9300 us dollars from online royalties and you still going round saying bullet is cheating when I have given u 40percent of my own right instead of 10 or 20percent?” he queried again.

Ebony, born Priscilla Opoku-Kwarteng, died in a car accident on Thursday, February 8, 2018, together with two others – Francisca Kuri, her childhood friend, and Francis Atsu Vondee of the Ghana Air Force, believed to be her bodyguard.

RuffTown Records, in collaboration with the Musicians Union of Ghana (MUSIGA), Ministry of Tourism, Arts and Culture and Kasapreko Company Limited, organised a tribute musical concert at Trade Fair Centre for Ebony where tickets sold at GHC10.

Bullet at the time mentioned that the gate proceeds will be used to support the foundation. But in June this year, Bullet mentioned that it had halted the process due to a misunderstanding between the label and Mr. Kwarteng.

“Everything has been put on hold because there was a misunderstanding with the father. Sometimes you go and tell him this is what you’re doing but later he tells you that you never told him,” he said on Hitz FM.

Previous FORGET ABOUT BULLET, I WILL SET UP EBONY’S FOUNDATION MYSELF – Ebony’s Father
Next STEP DOWN FOR MAHAMA TO TAKEOVER – Mzbel Tells President Akufo-Addo