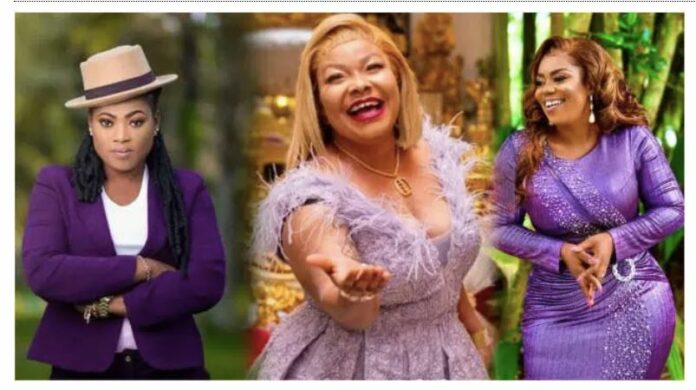 Recently, Nana Agradaa and Joyce Blessing got into a heated argument on social media. Blessing When Joyce learned of her husband’s split, she quickly joined the social media bandwagon.

Every chance is taken to criticize the other, which has resulted in long-standing hostility between Joyce Blessing and Nana Agradaa.

In response, Nana Agradaa attacked Joyce Blessing and shared an old video of Joyce Blessing professing her love for her purported lover while intoxicated.

Nana Agradaa threatened Joyce Blessing that she would leak her $ex tape into the public domain if she dared her.

The gospel singer Piesie Esther claimed on Kingdom Plus FM that she reached out to Nana Agradaa and proposed a truce as well as to ask her to forgive and stop torturing Joyce Blessing if she had ever hurt her.

According to her, this was during the heat of the argument, Ghbase.com reports.

Piesie Esther attempted to convince the now-Evangelist to cease firing while finding it challenging to do so.

Because she is now a woman who is sharing the gospel, Pieisie Esther believes Nani Agradaa is paying attention to her.