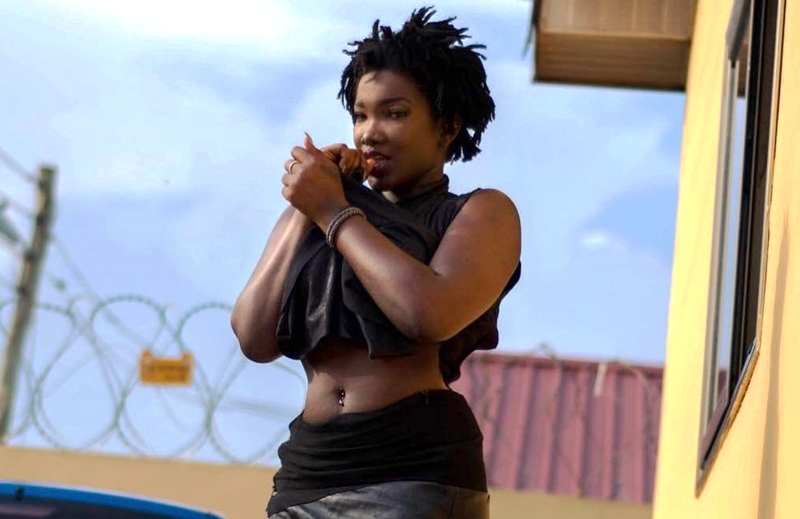 She loves to show a lot of skin and many have suggested it is her way of getting attention to herself and her music but Dancehall musician, Ebony says they are far from the truth.

This is because she has been wearing skimpy or revealing clothes way before she entered into music.

Thus everything you see is a true representation of who she is because she does not fake her identity. Yes, she is a bad girl and she is proud to be one

“The bad girl brand people see out there is a true representation of me. This is how I have been even before coming into the limelight” she told Showbiz in an interview on Monday.

“I don’t pretend to be who I am not. I am a very bad girl and there is nothing anyone can do about it. And I am proud to say it. I have nine piercings and a lot of tattoos all over my body and this is how I want to live my life,” she said.

According to Ebony, no one can tell her what to do so far as she knows she is doing the right thing and anyone who wants to love her can do so by supporting whatever she does.

“I chose not to talk about it but I was very angry because there were ladies there with more revealing outfits but they were not asked to leave.” said Ebony who has three nominations in this year’s Vodafone Ghana Music Awards (VGMA).

Asked if revealing too much flesh does not draw unnecessary attention from the opposite sex, Ebony said the pressure is sometimes unbearable but it she knows how to handle such situations because men will always be men.

Real name Priscilla Opoku Kwarteng, Ebony who is known for songs like Dancefloor, Turn On the Light and Kupe said she has plans to collaborate with Sarkodie, Shatta Wale among others.

She also expressed her gratitude to her management team Rufftown Records for spotting the talent in her. “My management team is made up of wonderful people, they make sure I get all the shows and promote my songs” she said.