Prophet Nigel Gaisie, the ounder and leader of the Prophetic Hill Church, has indicated that NDC’s flagbearer of the 2020 general election, John Mahama, will be Ghana’s next president.

The popular man of God made this prophecy and some other serious prophecies on Facebook today, August 26, 2020.

The popular preacher, in a Facebook post, declared the winner of the upcoming 2020 elections and indicated that John Mahama was going to beat Akufo-Addo.

According to the man of God, he heard in his right ear that the 2020 NDC flagbearer was going to be the next head of state.

The prophet also added that he saw the Chief of Staff coming to him with a heavy load but she was stopped by someone pulled her back.

He also added that he saw that there was going to be a serious attack on a running mate of a presidential candidate and asked the said political party to pray for the person.

Prophet Nigel Gaisie added that Ghana was going to prosper in the year 2021 and added some prophecies about a strong wind blowing over America.

He also said that there was going to be some sort of unrest in Burkina Faso, Ghana’s neighbours.

However one of the prophecies was about the man of God himself. According to him, there was going to be a plan to him and his ministry and that the said plan was going to come through a car accident

He indicated that the plot to cut short his life was due to the fact that he had become a thorn in the flesh of some powerful people.

This is not the first time the popular preacher has made prophecies involving high-level personalities in the country.

He has also made prophecies about top celebs in the country. 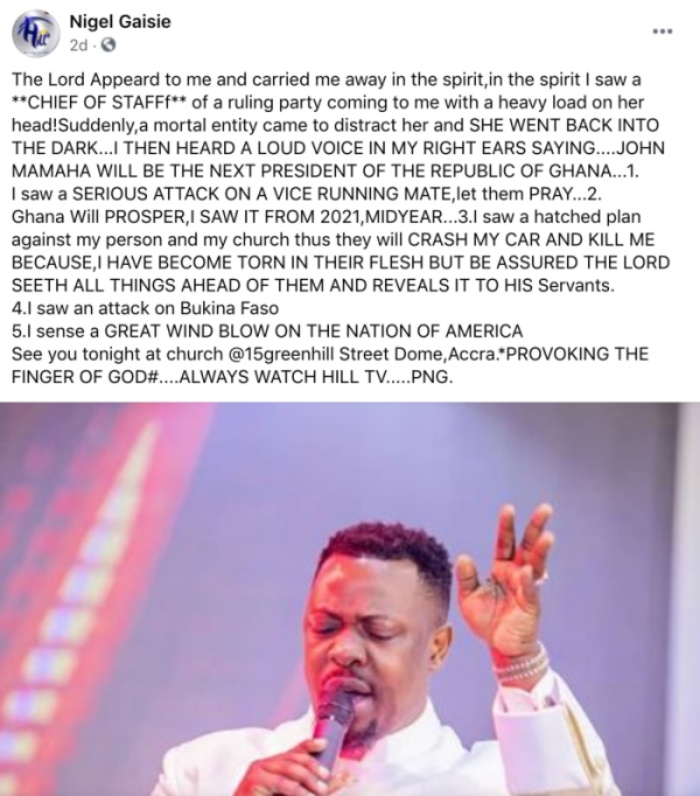