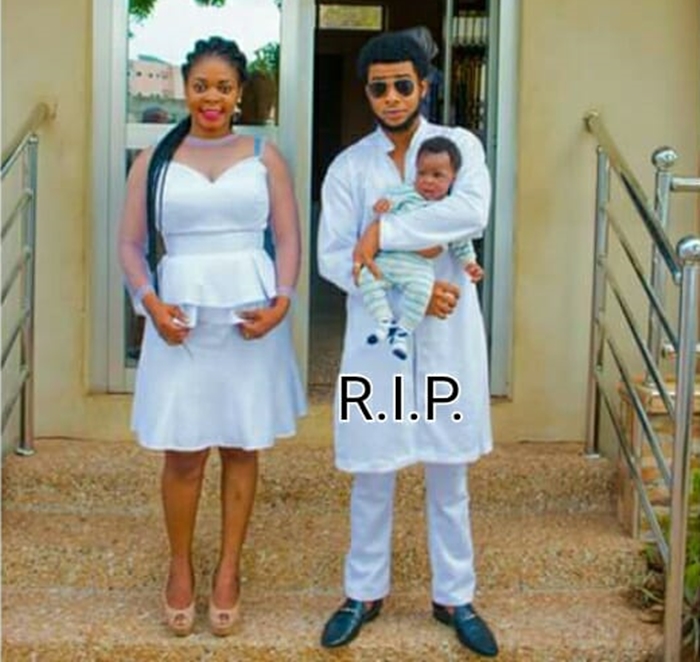 The husband and baby father of former HIV/AIDS Ambassador Joyce Dzidzor Mensah has reportedly passed on.

According to a social media post by Joyce and others who seem to know the couple, the young man died after battling for his life in the hospital for sometime, until his unfortunate demise.

Joyce Dzidzor made headlines in 2014 when after parading herself as Ghana’s HIV/AIDS Ambassador and claiming in dozens of commercials as being HIV positive suddenly switched, claiming she was never HIV positive.

Last year, she wrote a letter to the then President of Ghana-John Dramani Mahama to recant her recantation of her status in 2014. She stated in her letter that the stigma attached to HIV/AIDS, which seriously affected her and her children, caused her to change her tune.

She asked for compensation for her work at the AIDS Commission as her contract was terminated unjustly. This was after it emerged that she had safely given birth.

Now, Joyce Dzidzor says her husband and father of the child she gave birth to in 2016 has died and the tribute she wrote on Facebook will make you wonder if all her wires are well placed in her head. When it comes to Joyce Dzidzor, you never know what to believe or expect!

“My story. My story never ends. O yes it will not end until my last breath…. I met a man at age 19 and got pregnant for him. He allegedly died of AIDS in 2007. He died when I was still pregnant. After giving birth I was thrown out of the house by my neighbors because I was tagged with AIDS. I was on the street, no food, no money. I then started to talk about AIDS and premarital sex from the street to the churches until the Ghana AIDS commission officially made me an ambassador to educate people on AIDS. O.I.C.I also gave me enough training on public speaking and HIV education. The AIDS commission letter terminated my appointment after using me for videos advert and Billboard only because I sung during an interview on gtv. They left me without paying me for my work. My son started suffering of stigma due to my program with the AIDS commission and so I denied every story I ever shared just to protect my him. The man I got married to in 2010 only wanted an opportunity to travel outside Ghana and so when the opportunity came, he grabbed it through me , saying goodbye to Ghana and now he lives in London. Because of him, I’ve been banned from traveling to UK. Our marriage ended with a baby girl. I met Edmund Akaniru in 2015 when I was working on my series. He worked for me as a camera man and we started going out. I told him I had two kids and I was 27. He said he loves kids and he was also 27. I asked him if he wasn’t bothered about my HIV issues in the media and he replied “no I don’t care” he moved in with me and also shared his story with me. One day he came home with huge sums of money but went back with the money and returned empty handed. He never told me where he got that money from. Few months later he told me he was a fraud boy and he used to do hacking. He explained to me how he and he’s​ friends hacked into MTN mobile money account and made so much money he later said the police was then after him and that was why he moved in with me. One of his friends was arrested and his family paid fifty thousand cedis to MTN out of the money they spent on alcohol,Drugs and women. He said he had changed and was never going to do internet fraud anymore. He said his father was a Nigerian and mother was half Ghanaian half German. But I later found out it was not true, both parents were Nigerians​. I had gotten pregnant for him and had a baby boy in 2016. After some time, truth about Eddie started to unvail. Eddie was 21 year as at the time I met him and not 27. I got angry with him and said to him I don’t want any small boy. He said age was just a number. Later in 2016 Edmund started keeping late and some times returned home following day, there was physical and emotional abuse because I couldn’t give him money when he asked. December 2016 he started falling sick and treatment at kaneshie polyclinic didn’t work so I took him to a different hospital. No doctor was able to diagnose him since all the tests conducted showed he was medically ok but no blood in his body. His family later took him to Nigeria and since his mother was a doctor I hoped it would be much better. But unfortunately nothing was diagnosed in Nigeria unless very low or no blood in his body. I kept checking on him and he was later taken to prayer camp where he told me his aunt was behind his strange sickness. Eddie also apologized to me for being the cause of all my downfall. But I forgave him. No matter what, I still loved him. But sadly, I received a call that Eddie had passed on on the 7th May 2017 and was burried on 8th may 2017. Yes. Once again Joyce Dzidzor has lost a man. Eddie died at 24 and I just turned 30. the story of the general public as usual, name calling and accusing fingers pointing at Joyce. But what can I say?? Sorrows last for the night but joy surely comes in the morning. My story continues….”

Previous SELLY GALLEY EXPECTING HER FIRST BABY?
Next SARKODIE RANKED AS THE ONLY GHANAIAN IN FORBES AFRICA TOP 10 RICHEST MUSICIANS